Rider on the Storm: Why I Admire Erin Burnett 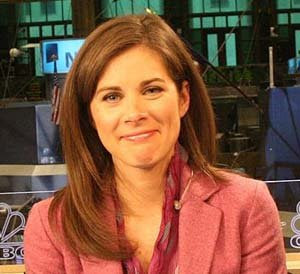 In life, everybody has somebody that they admire. Usually, people admire somebody for bravery in combat, a willingness to speak out/report on divisive issues, or giving their life for a cause. For me, this person showed a willingness to report on divisive issues fairly and impartially. That person is CNN anchor Erin Burnett, and I will explain why I think so in the following paragraphs.

Burnett got her big break on the business network CNBC, and during her 5 1/2 years on that network, she established a reputation as someone who reported the facts and called it as she saw it. For example, on the market advice show “Mad Money,” Jim Cramer, the host, did a report on a policy implementation by then-Australian Prime Minister Kevin Rudd, which was confirmed to have resulted in the deaths of many camels. Burnett, a camel lover in her own right, called out Rudd as a “serial killer.” Cramer backed her up, referring to it as “camelicide.” Based on the facts of the story and due to her reputation as a camel lover, she was willing to call it as she saw it. That, in my view, deserves much praise.

On the first airing of her new show, entitled “Out Front,” she did a report on Occupy Wall Street, which garnered a lot of blowback, to say the least. The report featured her interviewing some of the protesters, which showed them to be the shallow fools that they were. She added that, if all they needed to know was that we had, indeed, made money off of the Wall Street bailouts, it seemed just a little pointless. In responding to critics, such as obscure media “critic” David Zurawik and that paragon of Leftism, legend in his own mind, and film-maker Michael Moore, she did not back down, and told them all to “get real.” To me, reporting the facts about OWS and not backing down showed a lot of courage and deserved more praise than it got.

On the February 16, 2012, airing of “Out Front,” Burnett did a report on Iranian nuclear capabilities. In it, she highlighted the great dangers these bombs posed, how the USA is responding, and how we would need to respond. She then interviewed Congressman and terrorism expert Peter King. They talked about the threats for several minutes, and then it was off to other stories. Blowback came the following day in the form of Glenn Greenwald and the long-ago irrelevant Matt Taibbi, and she would not back down from her reporting, saying she was proud of herself and her team for the reporting they had done. This also showcased her courage and deserved more praise.

These are but a few examples of the journalistic integrity and courage that Erin Burnett has shown and exemplified in her years of reporting. Obviously, not everybody will agree with my assessment of her, but I still hope to have presented my case in a clear fashion and hope to have, in the end, done her and her show some long overdue justice.