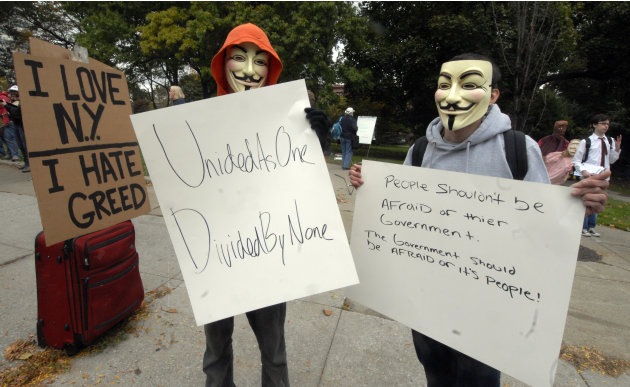 Oh how OWS drips with irony:

NEW YORK (AP) — Look at a photo or news clip from around the world of Occupy protesters and you’ll likely spot a handful of people wearing masks of a cartoon-like man with a pointy beard, closed-mouth smile and mysterious eyes.

The mask is a stylized version of Guy Fawkes, an Englishman who tried to bomb the British Parliament on Nov. 5, 1605.

“They’re very meaningful masks,” said Alexandra Ricciardelli, who was rolling cigarettes on a table outside her tent in New York’s Zuccotti Park two days before the anniversary of Fawkes’ failed bombing attempt.

“It’s not about bombing anything; it’s about being anonymous — and peaceful.”

To the 20-year-old from Keyport, New Jersey, the Fawkes mask “is about being against The Man — the power that keeps you down.”

Right. It’s not about bombing anything. Even though they are wearing a mask depicting a fanciful image of someone who did attempt to bomb something, someone who was a terrorist. An image created by a graphic novelist and Hollywood.

In the UK, this day is celebrated. Fawkes isn’t celebrated; the thwarting of his terrorist plot is celebrated. It’s not celebrated as much as it used to be, but it still is important in parts of that country. So who is Guy Fawkes and what did he do?

70 years before Fawkes became a household name, England’s King Henry VIII broke with the Roman Catholic Church (to say the least, his reasons for doing so were dubious, but that is an item for another post). Henry’s son and successor, King Edward VI, further empowered the Anglican faith over English religious life; however, those who practiced the Catholic faith, especially amongst some of the most powerful nobles, remained in the majority. Following the fifteen-year old Edward’s death (he had ruled for seven years), the Anglican Church was very much threatened during the five year reign of the Catholic Queen Mary I, but rebounded and expanded during the very long rule of Queen Elizabeth I. Near the end of her reign, and without a husband or a child, Elizabeth named her cousin James, another Protestant and King of Scots, as her heir; he succeeded Elizabeth to the English throne in 1603, being crowned as King James I (in Scotland, he remained King James VI, and maintained a separate government for Scotland, which wouldn’t officially join with England for another century). At this point, the majority of the English people, along with the vast majority of the nobility, were Protestants.

Although born into a Protestant family, Fawkes later converted to Catholicism. By the time of James accession, Fawkes had become militant. Wanting to see a Catholic ruler installed, Fawkes became involved with a plot to see this done; the conspirators planted barrels of gunpowder under the House of Lords, which would then be exploded when Parliament was set to meet on November 5, 1605 with King James in attendance (this has been known as the Gunpowder Plot). The King’s spies, however, had got wind of the plot, and arrested Fawkes as he was waiting for the appropriate time to set the gunpowder off. After being tortured into naming his co-conspirators, Fawkes and the other terrorists were tried for treason in January, 1606; he and the others were promptly convicted and sentenced to death, which was carried out on January 31, 1606. This was the real Guy Fawkes. The day the plot was thwarted has become a UK holiday ever since.

It should be noted that while the animus of the mostly Protestant English people towards Catholics increased and despite the plot to murder the Protestant king to thereby install a Catholic monarch, James avoided getting England involved in what would become the Thirty Years War that began in 1618, an extremely brutal and destructive war between various Catholic and Protestant countries and lands that would engulf most of western and central Europe (massacres of civilians were common; it is estimated that anywhere between 30 and 40 percent of the population of what is now Germany were killed during that war).

Going back to the AP piece:

But history books didn’t lead to the mask’s popularity: A nearly 30-year-old graphic novel and a five-year-old movie did.

“V for Vendetta,” the comic-based movie whose violent, anarchist antihero fashions himself a modern Guy Fawkes and rebels against a fascist government has become a touchstone for young protesters in mostly western countries. While Warner Brothers holds the licensing rights to the Guy Fawkes mask, several protesters said they were using foreign-made copies to circumvent the corporation.

Yet whether the inspiration is the comic, the movie or the historical figure, the imagery — co-opted today by everyone from Wikileaks founder Julian Assange to the hacker group Anonymous — carries stronger connotations than some of the Occupy protesters seem to understand.

While Fawkes’ image has been romanticized over the past 400 years, he was a criminal who tried to blow up a government building. It would be hard to imagine Americans one day wearing Timothy McVeigh masks to protest the government or corporate greed.

I can imagine that’s true. After all, McVeigh blew up a government building while Democrat Bill Clinton was President, something I’m sure many of the Democrat OWS supporters would find wrong. Look who these people are protesting; it sure isn’t the government being led by Democrat Barack Obama. I mean, has anyone heard about OWS going to the house of Obama’s crony capitalist buddy and fellow Democrat Jon Corzine? Me either.

Many of these same people go around wearing T-shirts with the famous picture of another terrorist, Fidel Castro’s late Communist buddy Che Guevara. And then, of course, I doubt any of the OWS people questions Obama about those he would call an “acquaintance,” such as the terrorist Bill Ayers, still infesting the American university system. The AP piece I linked to states that even Fawkes’ reputation has been getting rehabilitated over many years:

Lewis Call, an assistant history professor at California Polytechnic in San Luis Obispo, said the masked protesters are adopting a powerful symbol that has shifted meaning through the centuries.

“You can seize hold of it for any political purpose you want,” he said. “That’s the real power of it.”

Ain’t that great? But it’s actually kind of understandable; there are Democrats in this country who have stated they saw Osama bin Laden as a freedom fighter instead of what he really was, a terrorist. I guess it all depends on the revisionist history Democrats want to believe in.

One of the myriad of complaints from the OWS crowd is how American businesses get tax benefits from moving production operations overseas, especially to China. In the AP piece, it’s mentioned that the American Warner Brothers corporation owns the rights to license the masks. To avoid being linked with an eeeevil American corporation:

…several protesters said they were using foreign-made copies to circumvent the corporation.

And where, pray tell, are these foreign-made copies produced? Irony alert [emphasis mine]:

At Zuccotti Park in New York, the Guy Fawkes masks have been worn over the past month by Occupy protesters ranging from self-proclaimed anarchists to drummers to those impersonating “zombie” bankers. Few wore them Thursday afternoon because of the arrests of masked activists. But they weren’t gone — just hidden.

One was in the left hand of 32-year-old Jason J. Cross — right under a protest sign. He had 20 more stashed in his tent, to be sold at $5 apiece.

Now, I don’t know if any of these Fawkes masks are produced in the US; but I find it extremely hypocritical for these people to whine about American products being made overseas, then actually purchasing a product produced overseas. Then again, this hypocrisy is usually joined with stupidity:

“The origins of this mask comes from the idea of rising up against the government,” he said. “Guy Fawkes represents the fact that the people have the real power.”

What’s really fascinating about such morons is how they could, but don’t, wear images of others who really believed that the people have the real power and did something about it. I can think of a few, all of whom came after Fawkes: George Washington, Thomas Jefferson, Ben Franklin, John Adams, James Madison, Alexander Hamilton, John Hancock, Patrick Henry, Thomas Paine, and so many others who put their lives on the line during the American Revolution. Unfortunately, it doesn’t appear that American pop culture has deemed these real American heroes as “cool” enough for bestselling graphic novels or CGI-enhanced movies out of Hollywood. Instead, just about all pop culture tells us about the above true revolutionaries is that some of them owned slaves and falsely claim the Constitution relegated Americans who were black as 3/5 a person, all without providing an iota of context.

The Tea Party protests and movement of the last 2+ years came out of a sense of frustration of the crony capitalism of the government, of the government bailing out of various American companies, and the growing power of the federal government who are looking to rule us instead of serve us, as mandated by the U.S. Constitution. They moved beyond protests and worked within the system to peacefully confront many of the worst politicians during town hall sessions and to get people who believed the same Tea Party principles elected into office. Although those in the OWS protests claim to be frustrated at some of these same items as the Tea Party people, we’ve seen it degenerate into a mob mentality and outright idiocy, things rarely reported by the Democrat PR firms masquerading as the mainstream media; this includes Democratic Party pundits and supporters in the blogosphere, and a majority of the American pop culture icons. And at the same time, these same Democrats have falsely vilified the Tea Party, Democrats have come close to encouraging violence against those in the Tea Party, and embracing all the worst that is OWS. In the end, it makes sense we see OWS claiming Fawkes as a “hero” instead of the real heroic revolutionaries who established what is now the United States of America.

Guy Fawkes was a terrorist. Fawkes the man isn’t celebrated in the UK; stopping his terrorist plot is what has been and is celebrated.

Cross-posted at Scipio the Metalcon