"I plan to renounce any Republican who renounces Phyllis Schlafly."

Democrats are trying to jump on some comments conservative icon Phyllis Schlafly recently made:

“One of the things Obama’s been doing is deliberately trying to increase the percentage of our population that is dependent on government for their living. For example, do you know what was the second-biggest demographic group that voted for Obama? . . . Unmarried women. Seventy percent of unmarried women voted for Obama. And this is because, when you kick your husband out, you’ve got to have Big Brother government to be your provider. . . .”

Unfortunately for Democrats, Schlafly is speaking the truth. Plus, they and their moonbat allies are misrepresenting what Schlafly said.

Here’s how TPM opens their screed:

Conservative activist Phyllis Schlafly took aim at “unmarried women” at a recent fundraiser and in an interview with TPM, saying that they overwhelmingly support President Obama and are all on welfare.

First off, Schlafly wasn’t taking aim at “unmarried women”, but Democrat exploitation of unmarried women. Second, she doesn’t say they are all on welfare. So that is a lie. But TPM and Democrats also avoid an unpleasant truth, one that McCain shows graphically: 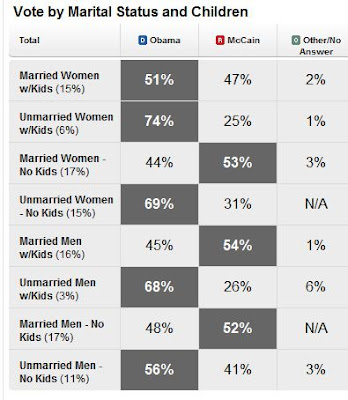 And which extremist right-wing racists put out this graph? CNN. Read McCain’s post for further information.

In an interview, Schlafly told this to TPM:

“Yes I said that. It’s true, too. All welfare goes to unmarried moms,” Schlafly told TPM.

I’m not sure if all welfare goes to unmarried moms, but a huge amount does. Someone I know who was one of those unmarried moms after divorcing her first husband, she was a small business owner without the ability to purchase health insurance for her kids (which was actually supposed to be paid by her ex-husband, but he was one of those deadbeat dads). So she had them put on Medicaid. Another unmarried mom I know had spinal surgery that was paid for by Medicaid; and because she probably won’t be able to work anymore, she will need to go on assistance. So I don’t think Schlafly is too far off.

Democrats are trying to get Republicans who have been endorsed by Schlafly’s Eagle Forum to, in effect, throw Schlafly under the bus for her comments. Are they kidding? For Schlafly speaking the truth? This is just more proof that Democrats, and other leftists that worship them, believe the American people are stupid. Let’s hope the Republicans supported by Schlafly’s group aren’t stupid and see through this liberal Democratic charade.