The 2010 census is approaching, and with it the 2011 redistricting process. As Swamp Yankee has mentioned the Online Left is eagerly drawing their own prospective maps to try to maximize their potential gain from the process, though the Online Right doesn’t seem to be nearly as eager.

So, I’ve decided to start drawing some 2010 district maps, hopefully for all 43 states that use them (7 only have 1 representative, and therefore only have 1 possible way to draw them).

Though i’ve decided to try to impose a pair of rules on how they’re drawn, in an attempt to make the resulting maps look a bit cleaner than what we have currently. They are:

1. All districts must be compact. This means they should all be in roughly the same geographic area, and have decently smooth edges.

With that being said, here is a Map I’ve drawn for the State of Oregon:

Here’s a closer view of the Portland area:

Overall, this map is likely to give a 2-3-0 Spread (2 Republicans, 3 Democrats, and 0 Swings), with the 2nd (Green) and 5th (Yellow) going Republican. Each district follows county lines pretty well except the 1st, which is a mix of Portland and Salem Suburbs across Washington, Clackamas, and Marion counties, and the 5th, which cuts across the sparsely-populated Eastern Lane county

1st District (Blue): This district is comprised mostly of the Left-leaning suburbs of Portland and Salem. It’s significantly different than the current 1st, which cover most of the Northwestern portion of the state, and as a result has no incumbent (at least I think so). Partisan rating probably about D+7

2nd District (Green): This district is comprised mostly of the Conservative Eastern 2/3rds of the state, though it does also contain parts of Clackamas county and Marion county outside of Salem. The incumbent Republican however, had his home drawn into the 3rd district so this should probably not have an incumbent either. Obama only won 2 counties contained in the district, Clackamas and Marion, but the Liberal areas of each are both in the 1st district. Partisan rating probably about R+8

3rd District (Purple): This district is comprised of the city of Portland, Flood River county, and a very small part of Clackamas county. As a result, it is heavily Democratic, and Obama probably would have won about 75% of the votes here. Partisan rating of about D + 22

4th District (Red): This district stretches from Eugene to the Northwest Corner of the State. It covers most of the coast, and is Strongly Democratic. Partisan rating of about D + 9

5th District (Yellow): This district starts from the Conservative areas in the Southwest part of the state, and winds up north, including Linn, Polk, and Yamhill counties and small portions of Lane and Marion. All counties in this district voted for McCain except Lane and Marion, but Jackson, Polk, and Yamhill all had McCain performing under 50% despite winning. Still, the other counties pull this district into the Republican column. Partisan rating of about R + 9

However, there is the distinct possibility that Oregon will gain another Congressional seat in the 2010 census, pushing it up to 6. I’ve drawn a map for that possibility as well: 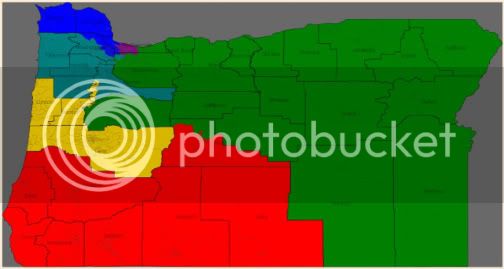 Another Close-up of the Portland Area

Overall, this map should give a 2-3-1 spread (2 Republicans, 3 Democrats, and 1 Swing district), and it’s generally more Geographically compact than the previous one.

1st District (Blue): This district is similar to the current one, as it cover the Northwestern part of the state and Portland’s Western Suburbs. It remains generally Democratic in nature. Partisan rating of about D + 7

2nd District (Green): This district is also similar to the current one, but it loses part of Southwest and Southcentral Oregon and gains most of Clackamas and Linn counties. As a result, it’s a little more closely divided than the current district. Partisan rating of about R + 7

3rd District (Purple): This district is smaller and more concentrated in downtown Portland, and is therefore even more Democratic in nature than the above 3rd District. This is easily a Democratic Party Safe seat. Partisan rating of about D + 25

4th District (Red): This district is based in the Conservative Southwest, and is comprised entirely of 2008 McCain counties. This is easily the most Conservative district in Oregon. Partisan Rating of about R + 11.

5th District (Yellow): This district is based in Eugene Oregon, and covers the Democratic-leaning parts of the Central Oregon Coast. It also stretches up to include Salem and the surrounding area, and it’s reliably Democratic. Partisan rating of about D + 10

6th District (Cyan): This is the swing district, and it covers the outer Portland and Salem areas. The Washington and Tillamook County parts of the district lean Democrat, while the Marion, Polk, and Yamhill parts lean more Republican. Partisan rating of about R + 1.

(the Program I used to create these maps is available here Credit goes to Dave Bradlee, who despite being a Kossack, writes good code)