By Dale Glading | Cross-posted at SaveJersey.com 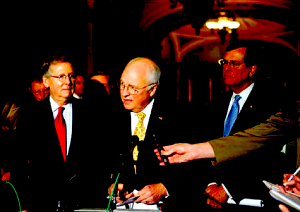 The day that George W. Bush decided to keep Dick Cheney on his ticket for a second term is the day that Barack Obama became the odds-on favorite to win the White House in 2008.

Don’t believe me? Consider the following…

Dick Cheney, a man whom I admire and a person with one of the most extensive public service resumes of the past 50 years, was asked by George W. Bush to head up his vice presidential search committee in 2000. After considering dozens of potential candidates, Bush settled on the man leading the search: Dick Cheney.

Not a bad call, since George W. was a relative novice to Washington in general and to the halls of Congress in particular. And if you watched the vice presidential debate between Joe Lieberman and Cheney, you knew that W. picked a good man for the job despite the fact that Wyoming’s three electoral votes were already safely in the GOP column.

After mentoring President Bush for four years, Cheney had a perfect opportunity to graciously bow out at the top of his game. Plagued by heart problems, Cheney could have exited stage left, freeing Bush to name a younger and more vibrant man as his heir apparent…

Does the name J.C. Watts mean anything to you? It does to me, because the former Canadian League football player and Baptist minister was a recently retired congressman from Oklahoma at the time. First elected in 1994, the voters returned him to the House three more times by increasingly large margins. Watts was photogenic, a gifted speaker – note his being selected to give the Republican response to the State of the Union address in 1997 – a minority and a college football icon. He was also the darling of evangelicals and conservatives across the country. Best of all, he was only 47 years old in 2004. 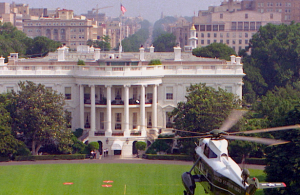 However, instead of stepping aside and allowing Bush to tap a fresh face that he could groom as his successor, Cheney remained on the ticket that narrowly won re-election. And when 2008 rolled around, no one was seriously considering Dick for the presidential nomination, creating a massive void that needed to be filled.

As is their habit, the Republican Party consulted its archaic playbook and settled on the candidate whose turn had supposedly arrived: Sen. John McCain. Mirroring 1996 when it was Bob Dole who had paid his party dues, McCain lost decisively to a younger and less qualified man.

But what if Cheney had been dropped from the ticket – willingly or otherwise – and J.C. Watts had been named to replace him? Do you really think that Barack Obama would have been nominated by the Democrats or been victorious in the general election?

I trust that Gov. Romney will learn a lesson from the 2008 Republican debacle and pick a younger officeholder with a serious upside to balance his ticket. Rep. Paul Ryan, Sen. Marco Rubio and Gov. Bobby Jindal come readily to mind.

But if the past is indeed prologue, he may select a solid but boring establishment politician like U.S. Senator Rob Portman (R-OH) to serve as his running mate. If he does, the uphill climb to victory in November becomes even tougher sledding. And win, lose or draw, the GOP will once again lack an heir apparent to pass the baton to in 2016 or 2020.