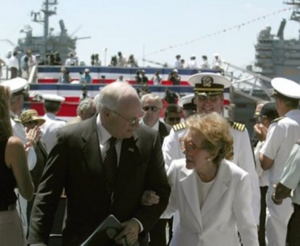 Tomorrow is it, Save Jerseyans! Three full days of ObamaCare hearings will commence before the U.S. Supreme Court just days after the second anniversary of the bill’s passage.

Another big story out there today, as I’m sure you’ve heard by now, is former Vice President Dick Cheney who underwent a heart transplant this weekend at age 71. This interesting coincidence compels your Blogger-in-Chief to pose a similar question to that which I asked back when our own U.S. Senator Frank Lautenberg (D-NJ) underwent cancer treatment:

Would a less-affluent senior citizen heart patient than Dick Cheney be alive today if ObamaCare had dictated his or her fate?

Following his seemingly-successful surgery, Cheney now has a better than 50% chance of living another decade. That’s valuable time with friends, grandkids and his spouse. Without this procedure, Dick Cheney would be living every day on borrowed time.

It’s also unquestionably true that health care will be per se rationed under ObamaCare as this monstrous bill takes full effect in the coming years. Other industrialized nations with socialized medicine invariably begin to make chillingly-cold ethical decisions based solely on budget-induced criteria. Who lives and who dies will ultimately come down to whether a government bureaucrat or panel of bureaucrats believes a patient is too old, sick, or costly to keep alive.

Clearly senior citizens will be most directly impacted unless the IPBA provision is repealed by the time it takes full effect in 2015. IPBA, or the “Independent Payment Advisory Board” in case you don’t know, is a controversial board of unelected bureaucrats in the ObamaCare with the stated goal of controlling Medicare costs. Everyone who knows or loves an American senior should be terrified!

But Matt! The President said his bill explicitly prohibits rationing?!

Yes, the President says a lot of things, Save Jerseyans. But keep in mind that he has a law degree, so he should know that writing something into an agreement, piece of legislation or formal court order is absolutely useless (from an execution standpoint) if the drafters failed to define the material terms.

Well guess what? ObamaCare’s engineers deliberately left a definition for “rationing” out of the bill! That means “rationing” will be defined however executive branch officials believe it should or needs to be defined to accomplish their desired ends.

Listen to U.S. Representative Phil Gingrey, M.D. (R-GA) question Health and Human Services Kathleen Sebelius on IPAB last year. She admits that the ObamaCare law fails to provide a definition for “rationing” and, consequently, how it might be defined going forward:

This post isn’t “alarmism,” folks, in the sense that the threat isn’t exaggerated. But yes, I firmly believe that we need to use highly-publicized stories like the Vice President’s heart transplant surgery to raise an alarm on the eve of this week’s ObamaCare oral arguments.

For our U.S. Constitution to have any meaning at all, the Commerce Clause must not be found to contain unlimited power for the federal government (the WSJ ran an excellent op-ed on this very point). Our property and our lives are literally on the line. And yes, rich men like Dick Cheney and Frank Lautenberg will still be able to find the best treatment here or abroad because they can afford to pay for it.

But what about the rest of us? You? Me? Our grandparents? The real so-called 99%!

We’re all out of luck unless the Highest Court in the Land tosses the bill’s most offensive provisions; or, alternatively, we elect a governing conservative majority in November 2012 that is determined to repeal ObamaCare altogether.

Why? Because a poorer men than Dick Cheney might die if ObamaCare remains intact.