Mitt Romney's Birthday by the Numbers 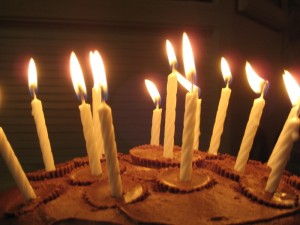 We hope he enjoys it (or at least as much as a candidate for national office possibly can). His first act as an official “senior citizen?” Deciding to NOT sign up for Social Security and Medicare, too.

But I’m interested in other numbers tonight… the price of gas, specifically, which was 23 cents per gallon in 1947 when George and Lenore Romney welcomed a new baby boy into the world. The average American individual salary was $3,500 back then, a sum that could have bought 8,050 gallons of gasoline at 1947 prices.

In 2008, when Mitt turned 61 years old, individual Americans 18-years old and older earned $24,062 per year on average. Gasoline, however, cost $3.74 per gallon when Barack Obama accepted the Democrat Nomination in August. At that price, a year’s worth of pre-tax income can only buy 6,433 gallons.

It’s no small difference, folks. Average Americans are losing their purchasing power; it’s a direct threat to our country’s embattled middle class. And with income falling (again) and gas prices rising (again) this year on President Obama’s watch, it’s easy to understand why Americans don’t feel like they’re “recovering” despite the President’s insistence that they are.

I’ll be anxious to see what gas prices look like when Romney turns 69; he might be running for reelection at that point.