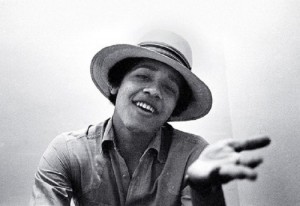 Following the tragic passing of Andrew Breitbart, we heard a lot about a video (or series of videos) which he had planned to release.

The Happy Warrior had promised to vet President Obama in 2012 in a way that the mainstream media had failed to do in 2008. Excited interest pulsated throughout the conservative community. Anxious anticipation might’ve been a better way to describe it.

But when the first video hit last night, we all heard a collective “huh? that’s it?”

Folks now want to know why the Breitbart team believes this particular video (embeded below) is so exceptionally damaging to the President. Well, for starters, the video shows Obama slobbering all over an allegedly radical, “racialist” professor, Derrick Bell…

This is a close associate of Jeremiah Wright, a man who was quoted by Jeremiah Wright regularly. This is a man who posited that the civil rights movement was too moderate because it accepted the status quo, and believed that the entire legal and constitutional system had to be transformed in radical fashion. This is a man so extreme that, as we’ve reported, he wrote a story in 1993 in which he posited that white Americans would sell black Americans into slavery to aliens to relieve the national debt, and that Jews would go along with it.”

Compelling if true. Yet most observers are still unimpressed.

Two reasons I can think of off the top of my head:

(1) “We” (engaged conservatives) have seen/heard so much about Saul Alinsky, Bill Ayers,  Jeremiah Wright, and Obama’s other cast of radical misfits over the last few years that new revelations tend to be white noise. Sure, we’re concerned about it. But it’s information overload. Emotionally taxing, too, to watch your country methodically destroyed by people who don’t really care much for the American Experiment, it’s legacy, and its constitutional tradition. Moreover, no one else seemed to care! Or believe it, whichever the case might be.

(2) There’s some confusion out there: Breitbart’s mission wasn’t really to “vet” Obama so much as to hold the media accountable. More disturbing than the President’s ideological playmates is the media’s continued disinterest in doing its job! That’s what motivated Andrew Breitbart to basically invent the “new media” along with other visionary contemporaries likes Matt Drudge and Rush Limbaugh.

Watch for yourself with those important points in mind, Save Jerseyans.