Yes, he has more money and better organization than his primary opponents. We’ve the heard the refrain. But the “establishment” working against him up there is far more formidable than the “establishment” to which he allegedly belongs; it wasn’t called by its proper name on the ballot (see this post’s title) but it was there. 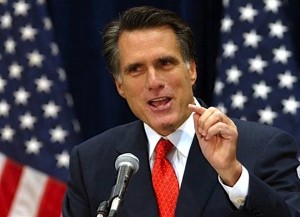 I’ve never before seen a Republican candidate whom the liberal media/Democrat establishment AND a plurality of the conservative new media were so utterly and completely determined to defeat. Think about it: when was the last time you saw David Limbaugh and Michelle Malkin pulling for the same candidate as the autoworker unions and the DailyKos?

What’s more, other shadowy groups were working overtime to produce a Democrat voter-driven Santorum victory (something the Senator was also allegedly doing with robocalls) that would’ve served only to further complicate an already complicated primary’s trajectory.

Mitt nevertheless improved his performance – in terms of percentage and raw votes – over his last campaign in the Wolverine State.

How is that evidence of the so-called “enthusiasm gap” we keep hearing about? It’s not. And the most impressive part? Mitt won up there campaigning against the auto bailout! “Favorite son” status be damned. That’s like running in Iowa against ethanol subsidies. No easy thing to beat Detroit on their own turf but Mitt pulled it off all the same.

Unfortunately, media on both sides of the ideological coin will continue to do EVERYTHING THEY CAN to artificially prolong this contest. The conservative media is motivated by ratings; the liberal media is motivated by a desire to see a liberal reelected in November. And it’s clear enough from where their money and attacks are directed whom they’re united with the labor unions to bring down.

What Mitt Romney proved last night in Michigan is that he can take them all on than win. The odds grow longer when the President opens his own purse, but Mitt is showing he’s tough enough to weather the storm. Thank God for it! Obama is vulnerable and we need a new president before it’s too late to reverse the damage.