How Did We Get From Spending Cuts to Tax Reform?

We have another Republican presidential debate to watch tonight, Save Jerseyans (BTW – be sure to follow our Twitter page @SaveJersey tonight beginning at 8:00PM for #CNNDebate live tweets).

And if the last few debates are any guide, CNN’s “Western” leg will feature questions on topics including border walls, compulsory vaccinations, and “creating jobs” (whatever the hell that means). The candidates will also talk a lot about tax reform thanks to Herman Cain’s gutsy yet controversial 9-9-9 proposal. 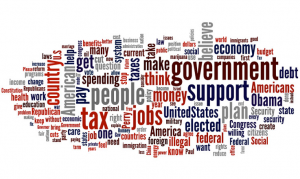 But one topic, curiously enough, seems to have eluded the field’s focus in recent weeks: shrinking the size and scope of the federal government! You remember: the thing we held those “tea parties” over last year?

Yes, we’ve discussed dismantling Obamacare at every debate.  That’s still only one piece of the pie. A big piece, to be sure. But government spending was out of control long before Obama, Pelosi and Reid threw a rager and finally busted our credit rating. So why are all of the candidates talking about tax cuts?

Don’t get me wrong. Ultimately, tax reform is a hugely important step in saving our republic from decline. No doubt about it! We can’t long survive as a country where half of the citizenry hold no financial stake in its operation, nor as a global competitor with the highest corporate tax rates of any industrial nation. On the micro level, throwing good money after bad succeeds at nothing but depriving the private sector of job creating investment capital and retail chains of revenue-generating sales. We know that government can’t create jobs; it can kill them by raising taxes.

The only problem with a platform centered on tax reform is that tax cuts alone won’t get us to the promised land, Save Jerseyans.

We tried a tax cuts only strategy last decade. It failed. President G.W. Bush and a post-9/11 Republican majority lowered rates in 2003 and, to the chagrin of liberal pseudo-intellects everywhere, increased federal tax revenues by $785 billion between 2004 and 2007. What they neglected to do was cut spending. That left the country over-leveraged, under-capitalized, and extremely vulnerable to a cyclical economic downturn exacerbated by the largest government expansion since last great depression under President Obama.

But my concern here isn’t academic or historical. Pragmatism needs to rule the day.

We need to beat Obama next year to make tax reform (or any reform!) a near-term possibility. Everything hinges on it. Towards that end, we need to be cognizant of the reality that any serious Republican tax reform proposal will raise taxes on someone. It’s hard to avoid when nearly half the country is already paying nothing! It’s also a rhetorical handicap that’s exactly what the liberal media and the Democrat Party would love to run against in 2012. Class warfare is their weapon and they know how to use it.

My two cents? The Grand Old Party needs to stick with what works and avoid easily-discernible traps. Recent successes provide a clear path to large and sustainable majorities. The Tea Party changed Washington in 2010 by uniting Americans against government excess. Politicians like Paul Ryan, Chris Christie and Scott Walker gained iconic status over the past two years by innovating and implementing bold strategies to reduce government’s crushing and intrusive role in our lives.

Reigning in government needs to be the most important theme for our nominee in 2012, too.