We cover incidents of bias regularly here at Save Jersey. Ironically, we’re finding examples of ideologically-slanted coverage at “Politifact NJ,” a subsidiary of The Star-Ledger designed to… and this is the kicker… measure the veracity of public official’s public statements. Insert punchline here.

On Sunday, Politifact accused State Senator Tom Kean, Jr. (R-Union) of being only “half right” in claiming that high taxes enacted by Democrat politicians have driven businesses and residents out of the Garden State. The site specifically took issue with the supporting evidence provided by Senate GOP staffer John Gorman:

Gorman sent a handful of surveys and studies that show New Jersey’s poor standing in the nation for its business and tax climate. A 2009 report by the Pew Center on the States said, “While its proximity to New York City and its educated workforce are appealing to many employers, New Jersey has been ranked the least friendly state for business four years running, largely because of its heavy tax burden.”

That’s a valid point, but there are a number of factors involved in the creation and destruction of jobs.

Nancy Mantell, director of the Rutgers Economic Advisory Service, said “so many different things” are involved that you can’t just point to one factor as the reason for New Jersey’s job losses.

Ms. Mantell didn’t elaborate on the other phantom “things” forcing New Jerseyans to flee their homeland. Personally, I’ve known plenty of people who’ve moved to Texas, North Carolina, Pennsylvania or Florida to escape property taxes. I don’t know anyone who left because of the blueberry crop.

But maybe – just maybe – Ms. Mantell and the Politifact folks are criticizing Senator Kean for reasons that have absolutely nothing to do with the findings of a dispassionate, factual inquiry on their part. Perhaps their beef with Kean is… strictly ideological? Just take a look at a portion of Ms. Mantell’s substantial political donor history: 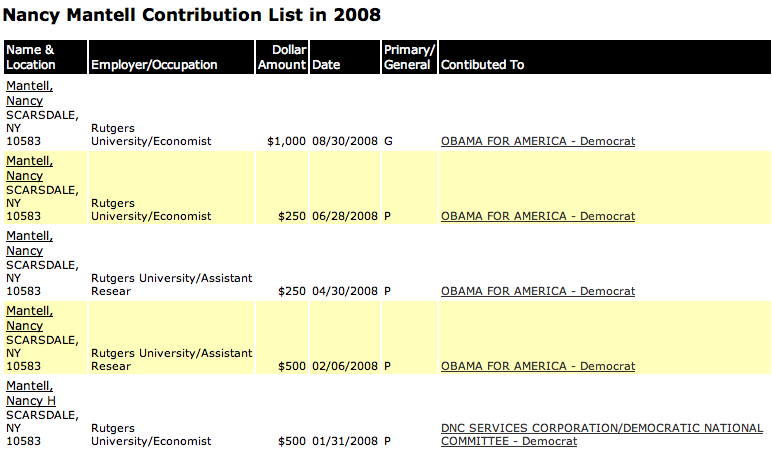 All in all, Mantell gave approximately $7,250 to Democrats including Barack Obama and Nancy Pelosi. No wonder she isn’t concerned about the negative effects of excessive taxation! She can afford to drop BIG bucks on some of the most notorious elected spendthrifts in American history; the Occupy Wall Street crowd hates fat cats like Nancy Mantell! Your Blogger-in-Chief, however, is a free market democrat (little “D”) strongly supportive of Nancy’s right to earn money and freely spend it on stupid things.

And I do mean stupid. There is indisputable evidence out there that high rates of taxation catalyze outward migration and, in turn, substantially decreased tax revenues. Politicians who won’t except this law of nature simply don’t want to, Save Jerseyans. One snippet from an ’09 Wall Street Journal piece on “soaking and losing the rich” pretty much says it all:

This result was all the more remarkable given that these were years when the stock market boomed and Wall Street gains were in the trillions of dollars. Examining data from a 2008 Princeton study on the New Jersey tax hike on the wealthy, we found that there were 4,000 missing half-millionaires in New Jersey after that tax took effect. New Jersey now has one of the largest budget deficits in the nation.”

Want more proof? The Save Jersey archives are loaded with “taxes make taxpayers leave” stories. In February 2010, I relayed the results of Boston College study tracking the outward migration of wealth subsequent to state tax hikes:

More than $70 billion in wealth left New Jersey between 2004 and 2008 as affluent residents moved elsewhere, according to a report released Wednesday that marks a swift reversal of fortune for a state once considered the nation’s wealthiest.

Conducted by the Center on Wealth and Philanthropy at Boston College, the report found wealthy households in New Jersey were leaving for other states — mainly Florida, Pennsylvania and New York — at a faster rate than they were being replaced.

“The wealth is not being replaced,” said John Havens, who directed the study. “It’s above and beyond the general trend that is affecting the rest of the northeast.”

This was not always the case. The study – the first on interstate wealth migration in the country — noted the state actually saw an influx of $98 billion in the five years preceding 2004. The exodus of wealth, then, local experts and economists concluded, was a reaction to a series of changes in the state’s tax structure — including increases in the income, sales, property and “millionaire” taxes.”

So how exactly is Tom Kean, Jr. only “half right,” Politifact staff, when he cites tax rates as the primary reason behind taxpayer flight?

Unless you can dispute ANY of the hard, cold statistics cited above, then I’m forced to once again conclude that  The Star-Ledger cares less about the facts and more about bashing Republicans. I’ll further conclude that Tom Kean isn’t “half” right; New Jersey’s largest newspaper is simply 100% biased!