By  Matt Rooney | Cross-Posted at The Save Jersey Blog

The gang over at Sesame Street is rolling out a new character, Save Jerseyans:

Their stated goal is to raise awareness among children that some kids go to bed hungry. Fine; we’ve all gotten the “clean your plate, there are starving children in Africa” rant from our parents. But as our friends at National Review Online correctly point out, Sesame Street is hopelessly off the mark here. 98% of the world’s hungry families live somewhere other than the United States of America. There isn’t a hunger epidemic (in America, anyway). To the extent that some people are hungry, the blame is more properly assigned to the subjects of an adult-level discussion: dysfunctional governments and ethanol subsidies.

Let’s stick with Sesame Street’s attempt to raise “awareness.” Liberals love “awareness.” It’s an excuse to wear multi-colored ribbons, attend glitzy fundraisers, and tell everyone else how much better than you they are!

But exactly what do “aware” libs want “aware” kids to do about it? Without direction to give force to values, it’s not surprising when modern children grow up to “Occupy Wall Street” without ANY articulable reason why they’re so angry. As a side note, I actually heard one interview where the interviewee, a “protester,” said he was joining the occupation because of his… alcoholic father. Good God! 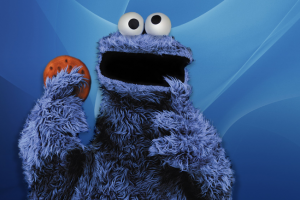 The truth about awareness: if they could get away with it, liberals in public television would counsel youngsters to demand the taxation of Cookie Monster until he was forced to give up “his fair share” of chocolate chip deliciousness and, eventually, liquidate his estate and sublet part of Oscar the Grouch’s trash can. Everyone on the block would be out of luck at that point because Cookie Monster was the prime cookie procurer. But since when has a lack of foresight stopped the Left?

And if huge new cookie levies fail to successfully end hunger in Muppet World (which it won’t), I’d expect some puppeteer Alinskites to coach kiddies to “eliminate” their local cookie monsters — Rosanne Barr-style! Guys like Michael Moore are running around on network news programs demanding that the rich be prosecuted;  too expensive! The Left rarely worries about saving money, but maybe they will make an exception, forgo the cost of a lengthy trial, and let a socialist muppet mob take care of business when it suits certain political ends.

Taking that blue bastard out is ALSO morally justifiable! Cookie Monster is, after all, a clearly evil hoarder of sugary riches while other starve all around him. Cookies belong to all muppets! And “C” doesn’t stand for cookie, folks. It stands for CRIME, and anyone with a better-endowed cookie jar than you is clearly a CRIMINAL.

Of course the end result of all of this will be anyone with cookies in their pockets, walking anywhere within a mile of the Muppet neighborhood of NYC, begging passersby, “Can you tell me how to get the hell AWAY from Sesame Street?”

But you can never, ever permit the truth to get in the way of a good liberal fairytale, Save Jerseyans. It makes for less-interesting television.