By Brian McGovern | Cross-Posted at The Save Jersey Blog 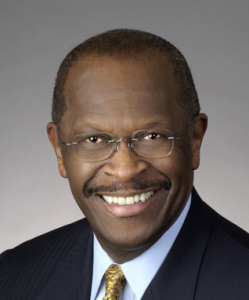 Ok, he did not actually say “Let them eat pizza.”

But still, in true Marie Antoinette fashion, Herman Cain made what anyone thinking politically would call a gaffe yesterday, Save Jerseyans. The Former CEO of Godfather’s Pizza decided to lash out at the admittedly ridiculous “Occupy Wall Street” protesters yesterday by letting them know that if they are unemployed it is their own fault:

Now, Mr. Cain might have a point to an extent. You should not blame other people for being successful, they do not succeed at your peril. Successful people create jobs, products, and services that many of us consider necessary to our daily lives. Making us pay for the objects of their creative minds is not something to be protested, but something to be celebrated. It is literally the creation of wealth and value right before our eyes. Something government could never do.

That being said, when you are running for President of the United States, you do not go around telling people that if they are poor it is their own fault and that they should blame themselves. While personal responsibility is incredibly important and a true conservative value, it cannot be denied that this awful Obama-recession has caused millions of job losses to those who have made good choices.

And while those who made good choices are certainly not sitting around “occupying” Wall Street all day, this quote will be a favorite for the Democrats, the media, and the Obama Administration to try and crush Herman Cain.

If the media can spin this back on Cain hard enough, I think his victory lap after the Florida straw poll may be over.

Brian McGovern is a New Jersey law student, campaign consultant, and the Managing Editor of New Jersey’s #1 conservative blog, Save Jersey. You can learn more about Brian and the Christie Revolution by visiting today!

Never Apologize to Them Again

"60 Minutes" Has a New Target, But They're Still Missing Glaring Reality of BLM/Antifa
Nick Arama

Judge: Maxine Waters' Actions 'May Result in This Whole Trial Being Overturned'
Townhall
'This information was hidden from you on purpose': Buck Sexton reacts to the release of Brian Sicknick's cause of death
Twitchy
CBS News Starts the Process of Doxxing Chauvin Trial Jurors
Redstate
Did Wrecking Ball Maxine Waters Give Derek Chauvin Grounds for an Appeal or Even a Mistrial?
PJ Media