I Stand With Israel

It has become increasingly clear to me over the past week that our media is simply not going to do its job. There are a rising number of what I refer to as “wake-up call” stories in the news, or more accurately, missing from the news. This “wake-up call” is to every American citizen in the country who thinks the mainstream media doesn’t have an agenda. The most recent of these stories is about the violent attack on the Fogel family in Israel. Not only on what happened to them, but how it was covered by our media, and handled by our government.

It was around 10:30pm that the bloodiest attack on an Israeli settlement in two years took place. Palestinian terrorists scaled the perimeter fence, triggering an alarm. Settlement security investigated the alarm, but did not notify the Israeli military. Their target already identified, the intruders waited in the settlement for some time before entering the Fogel household.

They entered through a window in the living room, thankfully, without noticing 6-year-old Roi asleep on the couch. The intruders continued into the bedroom where Udi, the children’s’ father, was asleep with his newborn daughter, Hadas. The terrorists brutally killed and slashed the throat of the father, and then sadistically did the same to the infant. Ruth, the mother, coming out of the bathroom, appears to have tried to fight off the terrorist, but lost, and was left to die on the carpet in the hallway.

The terrorists then went on to kill the 11-year-old son, Yoav Fogel, who was reading in his bed, followed by 4-year-old Elad Fogel, who they brutally stabbed in the heart, twice. Miraculously, they did not notice 2-year-old Yishai asleep in bed, completely covered by his comforter.

12-year-old Tamar Fogel returned home around 12:30am to find the front door to her home locked, and unable to get anyone to come unlock it. Tamar went to her neighbor, Rabbi Itamar Yeshiva, who grabbed a weapon when he noticed mud tracks near the house. However, after seeing Roi asleep on the couch, woke him by banging on the window, and then went back to his home.

Young Tamar Fogel turns the corner to find her mother, dead, in a pool of her blood in the hallway, with young Yishai sitting next to her, crying and screaming, “Where’s my daddy? Where’s daddy? I want my daddy.” She screams, and runs into the room, where she finds her father laying dead in his bed, blood everywhere, and next to him baby Hadas, also dead.

How did the Palestinian’s respond to the news of this sickening attack? They handed out candy in the streets, in celebration of the massacre of three young Israeli children and their parents. 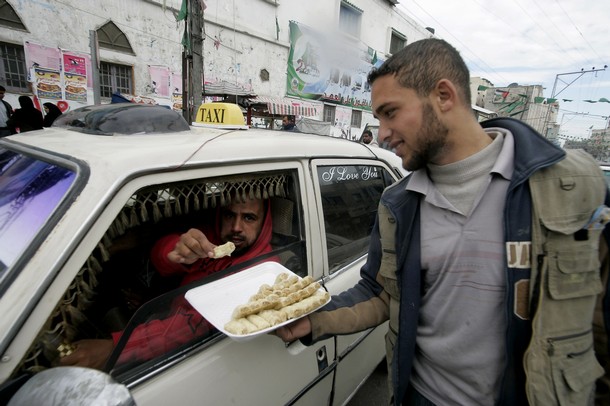 Pictures from the crime scene can be viewed here, but as a warning, they are violent, graphic images. The only reason I am providing access through my article is because of the medias repeated distortion, ignorance, and apathy on the growing hatred of Israel and its people. A country that at one time was America’s strongest and only ally in the Middle East. I think if the news sources below are going to report on this story in the manner they have, the readers should fully comprehend the disturbing attack that took place in the Fogel’s home that night.

Below are examples of our government’s and the mainstream media’s examples of “fair coverage” of this story:

According to the New York Times, it is the Israelis who are throwing “already shaky peace efforts into a new tailspin,” not with violence, but by building.

CNN who initially refused to report the violent murders as an act of terrorism.

The BBC referred the five murdered members of the Fogel family as “the Jewish settler family.” They also failed to mention the terrorist was an arm of President Abbas’ Fatah, and completed sidestepped the portion of the story where the 12-year-old daughter was the one to find her family massacred.

If this story were about 5 members of a Palestian family do you think the New York Times would refer to them as a Palestinian family or 5 Palestinian settlers, like they did with the Fogels?

Considering how Israel came to own the land on which it now builds, it is hard to understand why any mainstream or left-leaning news organization would be defending them to their last breath. If you happen to be a liberal, or simply apathetic to historic facts, you may be asking yourself, “Why would history cause the left to support Israel?” Allow me to provide you with a brief history lesson on Israel, Palestine and the Middle East.

Around the turn of the century, after almost 2 millennia of existence, the Jewish people decided it was time they established their homeland. This movement, referred to as the ‘Zionist Movement,’ occurred in large part as a response to the assimilation and anti-semitism of the Russian Empire and throughout Europe. The political movement was formally established by a Austro-Hungarian journalist. At that time, the movement sought to encourage Jewish migration to the Ottoman Palestine.

The British decided to split the land, and obviously the Arab people were not thrilled with this idea. Eventually, in 1947 the U.N. stepped in and decided to divvy up the land, half for the Jewish homeland and half to the Palestinians.

This is the moment every left-leaning, U.N. loving progressive should make sure they research. Your sacred United Nations gave the land, on which Israel is on, to the Jewish people. …So why again are they so anti-Israel? As usual, the left only stands with its principals when they align with their personal agenda.

On May 14, 1948, Jordan, Egypt, Syria, Lebanon, Saudi Arabia, and Iraq launched a war to prevent Jewish independence, and take over all the land. The Zionists not only maintained possession of their homeland in the Arab-Israel War, but they also acquired part of the designated Palestinian State. In other words, they kicked their butts.

The other detail the left likes to leave out is that the other areas designated to the Palestinians were obtained by Jordan and Egypt until 1967. Jordan took the West Bank, and Egypt took Gaza. Neither allowed the Palestinians to form their own independent government. Israel agrees to comply with the 1949 Armistice Agreement, withdrew their troops, and even gave back some of the land taken in the war. The Arabs continued their campaign of terror from 1949-1967.

May 1967, Egypt orders U.N. peacekeeping forces to leave and starts moving an army towards the ceasefire line and closes its waterways to Israel. Viewed by the globe as a casus belli, Israel delivers a preemptive strike, and does the same in reaction to Jordan and Syria’s bombardment. Not only did Israel successfully repel the Arab armies, but they gained quite a bit of real-estate.

Under U.N. Resolution 242, Israel agrees to give back the acquired land. Resolution 242 was not implemented until years later, because Arab countries would not agree. Years later, in 1978, Egypt agrees, and received the land they lost, but declines the Gaza Strip, providing Israel with its first real border. Jordan signs the peace treaty, giving up the West Bank, which Jordan held illegally from 1949-1967, and is still a point of conflict today. Syria and the Palestinians never agree and receive nothing.

Excuse my ADD, but every reason the U.N. is worthless and causes more problems than it prevents was just answered. Who in their right mind watches a country, better yet, a race of individuals, be attacked from three side, by three different nations, with annihilation as their main goal, and thinks it is a good idea, once the minority race wins, to just return all the land back to its previous owner? Israel, I know you conquered the entire region, but on a “peace accord” you should give back the land to all three groups, exactly where they were when they planned these attacks. …Honestly folks? I mean… really? Am I missing something here?

The main point here is, every mainstream media news organization has covered Israel’s response to this terrorist’s massacre by continuing to build, but I’ve only heard two or three voices speak about this family, and it wasn’t on the nightly news. I’ve seen more footage of President Obama’s March Madness picks than I have of this story. It is disgusting. The growing hate against Israel use to be subdued by the strong-arm of America, and its close relationship with the nation, however, this administration has made it painfully clear where it stands on the nation of Israel. Israel is literally surrounded by countries whose religion and governments would like to see it and its people wiped off the Earth.

Today, we have members of our administration and our media who will defend Islamic extremists based upon the fact that their land is “occupied.” Not only is that Israel’s land, but twice in the last 100 years they have taken more, in self-defense, and then given it back. I doubt they are so generous next time around. If the left was as pro-minority and anti-oppression as they claim, there is only one tiny nation being surrounded in the Middle East they should stand by. I have yet to hear the news report of an Israeli who breaks into an Arab home and butchers a family, plants a car bomb kill multiple people, or straps on a vest armed with explosives to take out a train full of innocent people. The difference between good and evil is indisputably clear.

Islamic extremism looks a good bit different from the persecution the Jewish people received in the thirties, but the hatred is very similar. When a group of people say they are going to eradicate a race from the earth, point to their religion as the basis of this belief, and aren’t afraid to blow themselves up to do it, the situation should not be downplayed, it should be exposed, condemned, and stopped. We said we’d “never forget,” so nothing like that would ever happen on the earth again, but I can’t help but wonder whose side our country seems to be on right now? I for one will stand with Israel.

“They murder, we build.” -Benjamin Netanyahu

(H/T to FreeBritanica.org for the map-pictures of the Middle East)