All liberal ideas seem to create a massive amount of jobs for Americans. Obama claimed his stimulus would create 4 million jobs. Sounds like a fish story considering the over 9% unemployment rate. I suppose that would explain why 6% believe him.

Just left a meeting in Niagara Falls about the high speed rail project: exciting opportunity to create a potential 247,000 jobs for WNY. 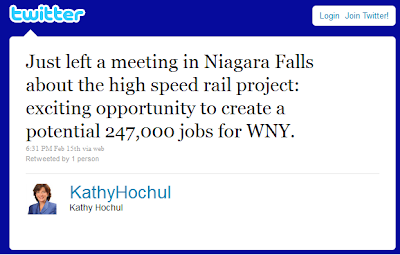 That’s quite a figure Hochul has deduced given the fact that the train’s most avid supporter, Louise Slaughter, estimates 21,000 jobs for all of Upstate, NY.