The Essence and Future of Conservatism: CPAC 2012 Should Restore Unity, Bring Back the Basics! 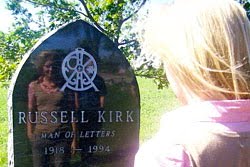 Barbarism, civilization, super-civilization –back to barbarism, according to mid-twentieth century Harvard sociologist Carl Zimmerman this is a cycle that no advanced society to date has been able to allude –round and round we go.

Civilization is fragile, a golden-mean of sorts, a balance between peaks of equal but opposite extremes: barbarism and super-civilization. Conservative fusionist Frank Meyer refers to super-civilization when he writes of the, “all-powerful totalitarian state, grinding impersonally and brutally upon the freedom of everyone.” He refers to barbarism when he writes of the, “subtler, quieter tyranny of ‘customarily’ imposed community, in which no one can escape from the deadly environment of hereditarily or geographically imposed association.”

Identifying the stage of any given society involves identifying where power is concentrated and how it is enforced. In barbarism power is concentrated in the hands of a tribe, clan, or trustee family. In civilization power is balanced, between the domestic family, the person, and the state or community, and very importantly, power is buffered by local intermediary institutions, like the extended family, church, fraternal and civic organizations and more. In super-civilization power is concentrated in the hands of a centralized super-state and exercised over atomistic individuals who have very small atomistic families, if they have families at all, and very weak intermediary institutions, if they have intermediaries at all.

If this analysis is correct then it will not be surprising to find that the modern conservative movement in America began to galvanize in the 1930’s, in the years following the passage of the New Deal -that great mechanism for centralization. After the New Deal came the landslide re-election of Franklin D. Roosevelt and the perceived mandate for a deluge of other centralizing socialist policies. These years may have been some of the most significant in America’s progression toward super-civilization, as unprecedented power became centralized in the hands of the federal government.

It was amidst this changing political climate that the modern American conservative movement began to take shape, slowly at first, as scattered voices of protest emerged, profoundly pessimistic about the direction in which their country was headed. In the words of pre-eminent conservative historian George H. Nash in his The Conservative Intellectual Movement in America Since 1945:

“In this beginning, there was not one right-wing voice, but three.”

First, there were classical liberals, or, “libertarians,” resisting the threat of the ever expanding state to liberty, private enterprise, and individualism.

Second, there were “traditionalists,” who were shocked by the rising tide of totalitarian governments, total war, and the development of a secular, rootless, mass society. They fought to restore intermediary institutions, what Robert Nisbit called the, “the breakwaters of tyranny.” They urged a return to traditional religion and ethical absolutes. They rejected moral relativism and warned that the subjective and ethically vacuous way of life would hollow out men’s souls, leaving them isolated and atomistic individuals with a void that the communitarian power philosophies of totalitarianism, communism, and fascism would rush in to fill.

Third, there appeared a militant “anti-communism,” shaped decisively, by a number of influential ex-communist radicals, turned capitalist evangelists. These former men of the left brought to the postwar Right a profound conviction that the West was engaged in a titanic struggle with a merciless and relentless adversary—Communism—which sought nothing less than the total conquest of the world.

While each wing of the modern conservative movement would have likely failed alone, together this natural but sometimes fractious coalition has achieved much success. Could this modern conservative movement be a successful one? The movement has now grown to maturity and although formal communism has been relegated to the dust bin of history, conservatism is still bound by a common enemy; super-civilization, both at home and around the world. Many however, have failed to conceptualize this, our common enemy, and the reasons for which each branch of the conservative movement is needed and dependent upon the other. The future, as always, is veiled from our vision. But for the moment this coalition, born in the wilderness a generation or so ago, although fractious, has undeniably achieved an unprecedented level of influence and importance.

In the words of Nash:

“For conservatives the wilderness years are long over. But the ascendency is incomplete, and tomorrow belongs automatically to no one. If the conservative coalition is to continue to prosper, it must remember the ecumenism of Reagan, resist the tendency to fragment, and avoid the temptation to retreat into a fatal passivity induced by disillusionment or despair. Let not the words of the unknown poet become conservatism’s epitaph:

On the plains of hesitation

Bleach the bones of countless millions

Who, at the dawn of victory,

Sat down to rest,