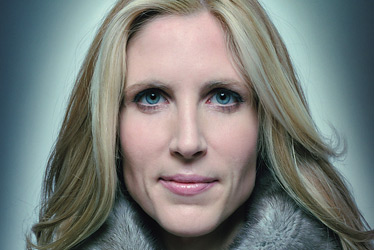 In an August 10 article appearing on the front page of OneNewsNow.com the world learned that Ann Coulter –the “Queen of Conservatism”– was one-upping Andrew Breitbart and Grover Norquist in their “gay” butt-kissing contest by accepting a new position as Honorary Chair of the pro-sodomy organization GOProud. Said Coulter about her new position:

I am honored to serve in this capacity on GOProud’s Advisory Council, and look forward to being the Queen of Fabulous.

If GOProud advisory board member and Gay-Stream Media (GSM) mogul Andrew Breitbart were any happier about this turn-of-events he’d be “gay”!

Ann Coulter has traded her Conservative crown in for a “gay” tiara. Now this formerly-closeted social-liberal is in the public bathroom stall with the “gays” and her credibility with Conservatives is going down faster than Larry Craig can knock three-times –or DID activist Andrew Breitbart can find out that nobody cares that he’s boycotting Conservatism, again! Well, he isn’t as bad as Mr. Swindle yet -but he’s gettin there!

Due to the controversy generated by Coulter’s move some young activists are asking themselves if “gays” can be a part of the Republican Party?

The answer to the question of course is no. No, Ann, they can’t. What part of “Party of No” don’t YOU understand?

I am not arbitrarily banning self-identified “gays” or pro-“gay” activists from membership in the Conservative movement. Nor am I  a “nasty bigot,” of course. I am simply explicating a tenet of Conservatism. Just ask Mr. Conservative himself.

Ronald Reagan on the relationship between the government and homosexuality:

We will resist the efforts of some to obtain government endorsement of homosexuality.

Ronald Reagan on “gays” and HIV/AIDS:

Maybe the Lord brought down this plague [because] illicit sex is against the Ten Commandments.

Now listen, you queer, stop calling me a crypto-Nazi or I will sock you in your goddamn face, and you will stay plastered.

Buckley later apologized to Vidal for his stridency but not before making his position on the unnatural vice clear:

…the man who in his essays proclaims the normalcy of his affliction [i.e., homosexuality], and in his art the desirability of it, is not to be confused with the man who bears his sorrow quietly. The addict is to be pitied and even respected, not the pusher.

GOProud, the pro-sodomy organization which Ann Coulter now honorarily chairs, is an organizational manifestation of what Mr. Buckley referred to as “the pusher.”

GOProud’s mission statement on its website proclaims, “GOProud represents gay conservatives and their allies. GOProud is committed to a traditional conservative agenda that emphiasizes limited government, individual liberty, free markets and a confident foreign policy at the federal level.”

However, in a moment of candor last August, GoProud co-founder Christopher Barron tweeted about the organization’s true mission:

We are a gay organization, we only work on gay issues, we have never claimed otherwise. My God people.

The aforementioned tweet was posted at 4:04 p.m. on Aug. 4, 2010 by Christopher Barron -the organizations founder.

GOProud’s advisory board member Andrew Breitbart seems to agree with Reagan and Buckley. He implicitly acknowledged that sodomy is not a Conservative tenet 25 minutes into an interview on C-SPAN last October when he stated that he is not Conservative or even libertarian, but “libertine on issues of consensual behavior among adults.”

Conservatism has grown in recent years, not only due to national frustration about the economy and Obama’s socialist health-care plan, but also due to the hard work of a lot of Conservative organizations and activists. This is a good thing, and the entire movement might be more united if it weren’t for the controversy and divisiveness brought about almost single handedly by GOProud.

Although the Conservatism which animates the Republican Party has no rigid ideological dogmata, it isn’t in essence populism either. Conservatism ascendant, I suppose we now need an objective standard by which to determine when a group is legitimate. I propose the following simple measure:

One must not insert an issue contrary to conservatism’s core tenets into one’s core organizational structure or core personal political identity, if one expects to be considered “Conservative.”

Ann Coulter, renounce your affiliation with GOProud, stop contributing to the “born gay” hoax, and stop using individuals with Same-Sex Attraction Disorder (SSAD) as fodder for the multi-cult (aka cultural-marxists), and third-wave feminists, or prepare to be divorced from Conservatism, and Christianity, for that matter. Oh by the way, Francios A. Houle says “Hi!” He says you’re welcome back in Ottawa again. Congrats! I guess I’m the one banned now. This is a zero-sum game. If you keep on the course you’re on, you lose.

The Reporter Who Broke the News About Clinton's Secret Tarmac Meeting is Dead
Townhall
Man, this is BAD: Joe Biden's presser is just a HOT MESS, especially when asked why he refuses to do a joint presser with Putin (watch)
Twitchy
Joe Biden's G7 Presser Was an Absolute Train Wreck on the World Stage
Redstate
Kamala Harris Is an Embarrassment the Media Can't Spin Away
PJ Media