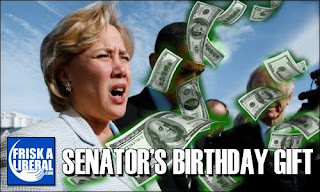 In the video O’Keefe confronts Landrieu’s baseless accusations and then dances them off, one by one.

O’Keefe starts by confronting Landrieu’s accusation that he attempted to “tap her phone line” -a serious felony charge.

On what evidence did Mary Landrieu base her claims? Well, based on the fact that James had his iPhone in his pocket, of course.

Louisianna State Senator Mary Landrieu called the FBI and claimed that James O’Keefe was trying to tap her phone lines with his iPhone.

Nevermind that obvious absurdity. I guess nothing could stop some left-wing Jouno-Lists, like Dave Wiegel, who was fired from the Washington Post after his three month tenure there for writing that Matt Drudge should set himself on fire,” among other things, from hastily accusing O’Keefe of anything that will hurt him.

Further, anyone half familiar with O’Keefe and his work understands that he never actually intends to do the things he discusses while he is conducting his investigations.

O’Keefe didn’t actually want to kidnap 14 year old girls from El Salvadore to make them sex slaves! He wanted to know if President Obama’s alma mater A.C.O.R.N. would be up for it -and they were!

Similarly, O’Keefe didn’t want to tap Senator Mary Landrieu’s phone lines. He went to her office dressed as a telephone repair man because he wanted to know if she was purposely blocking calls made by her constituents about Obama’s proposed socialist health care plan.

Obviously, Mary Landrieu isn’t going to ask her left-wing allies to publicize the fact that she is ignoring her constituents, but she might mention it to a telephone repair man who was called to the scene by constituents after they grew concerned because they couldn’t get through to her office for days on end.

If James had found the phone lines disconnected he could have further questioned Landrieu in an attempt to get to the bottom of things. If the lines were intact he could have questioned her about the status of the lines on previous days. She very well may have admitted to a telephone repair man that she had disconnected the lines because the phone calls about Obama’s unpopular socialist health care bill, or, about the Congressional bribe she took to vote for Obama-Care, were keeping her and her team from getting their government work done.

In the end O’Keefe danced off Landrieu’s accusations. He smashed the claims that his tapes are heavily edited to portray the subjects of his various investigations dishonestly. In doing so James proved that he is bold enough to seek truth despite intimidating accusations and that he is strong enough to continue to effectively smash the corruption that has become so systemic in our society.Finally James smashes the demonizing accusations that leftists have habituated themselves into hurling at anyone who threatens to expose their corruption. Unfortunately, most recently the left has co-opted the term “racist” for this cause, transforming the word into the very enemy it was meant to combat: bullying. Thus, leftists psychologically jam their followers by accusing anyone who accuses them of corruption of being a “racist.”

Anti-Christian MSNBC talk-show host Rachel Maddow is notorious for using this method of bullying and intimidation against anyone she sees as a threat. She lies to her viewers as easily as she breathes, calling anyone who exposes left-wing corruption of being “racist.” Nevermind that O’Keefe’s right-hand man is black.

Sorry Rach! Didn’t anyone ever tell you that it isn’t polite to point. Ya bully. 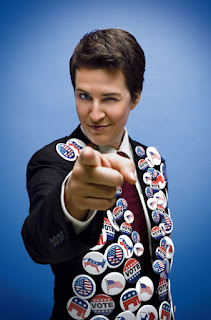