When a prominent person, group or corporation exploits a situation to promote an immediate singular solution to a controversial problem they deem to be settled while having no personal expertise on the topic and in the face of plausible fact-based criticisms of the basic problem, it’s a natural reaction to ask if they fully examined all aspects of it before adopting their final position. On the topic of global warming, readers here are free to borrow seven questions I repeatedly pose regarding due diligence. Perhaps they’ll also encounter the same deer-in-the-headlights reactions I’ve seen.

One can envision a cartoon caricature of the actual screencapture below, where an asterisk after the statement “The time for action to reduce greenhouse gas emissions is now” might lead to fine print saying “comments supporting our view are welcome, dissenting ones will not be seen by the public” 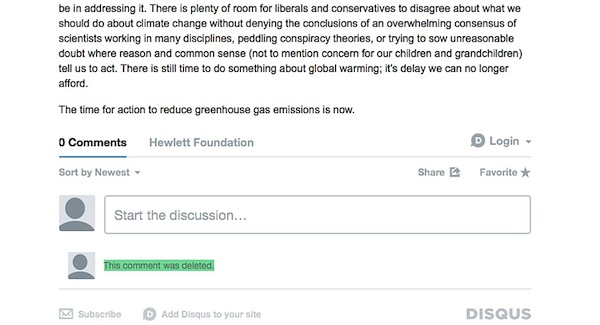 In a recent public comment section of a blog at the Hewlett Foundation, I questioned the blog writer’s settled global warming science premise and subtly tried to induce some introspective thought about alleged funding influences on either side of the issue. When the blog writer completely sidestepped my questions, this was yet another perfect opportunity to pose the following seven questions I’ve been asking since 2009. Readers here are more than welcome to use them – I’ve highlighted the specific words in green that would need to be changed to suit whatever person, group or company readers wish to send these to.

What is the Hewlett Foundation’s official position regarding allegations that the IPCC reports fall short of EPA guidelines requiring highly influential scientific assessments to meet a variety of standards for transparency, data availability and due diligence?

Has the Hewlett Foundation done its own due diligence assessments of IPCC reports to assure readers of its statements that information conveyed by it on the issue of global warming is above reproach? If those assessments have been done for the Hewlett Foundation, can it provide specific references in IPCC reports where theories of natural causes for the current global warming have been disproved, or more simply, show that the IPCC had any requirement to also evaluate potential natural causes?

If the Hewlett Foundation takes the position there is a scientific consensus in favor of the idea of human-caused global warming, is it prepared to show how “consensus” is the new operating standard of scientific inquiry across all fields of study?

If the Hewlett Foundation’s position is indeed that global warming skeptic scientists operate under guidance from industries opposing CO2 regulation, is it prepared to provide specific proof of improper payments to those scientists, and specific proof of faults in the scientists’ resulting reports that are obvious indications of industry-guided science errors?

Is the Hewlett Foundation able to demonstrate how energy sustainability and stewardship of the environment are synonymous with CO2 regulation, considering the questions above?

There’s really no right or wrong answers to those. But rather than answer them, the Hewlett Foundation’s blog moderator partly addressed the funding point in my first comment while avoiding my questions about his organization’s official position on skeptic climate science points. He subsequently directed me to a new blog by no less than the president of the Hewlett Foundation, Larry Kramer, who still skipped my questions. I’ll spell out Kramer’s original blog link url here http://www.hewlett.org/blog/posts/no-room-debate so readers are aware of what his blog’s prior title was, and so that all may see how the final url changes. Apparently “No Room for Debate” was too assertive, so it was changed mere hours after it appeared to “There Comes a Point”. The prior title is seen in my screencapture of the rebuttal I submitted. My rebuttal is no longer “under moderation”, though, it has been deleted.** [see author’s 2/11/14 & 2/15/14 updates below]

The first time I used those seven questions was in July 2009, after seeing a news item about Deutsche Bank’s declaration that we need to do something about global warming. Deutsche Bank never replied. Various Nike personnel gave me the email run-around about my inquiry being sent to the top administrators, when I asked how they justified bailing out of the US Chamber of Commerce over the global warming issue. My questions are most often ignored, such as when the “Grannies for a Livable Future” did so last year.

The disturbing part of this entire exercise is the irony in which these people are so keen to inform the public about the perils of global warming, yet they are unwilling or unable to use a great public opportunity to tell us why they know skeptic climate scientists are unworthy of consideration.

But there was one instance where a corporate spokesperson felt no restraint. 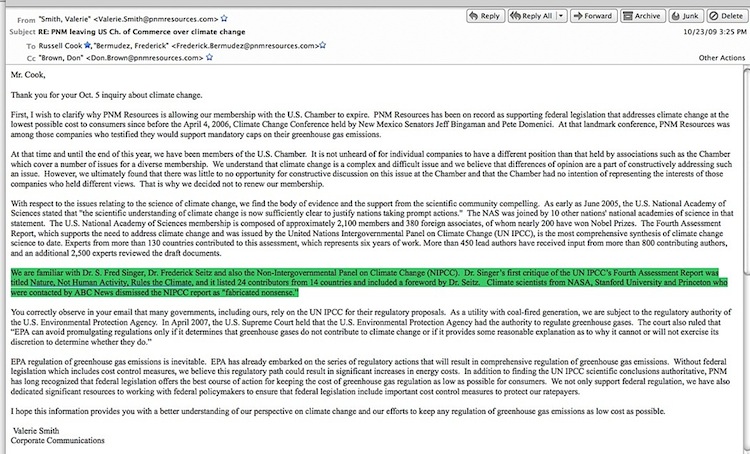 We are familiar with Dr. S. Fred Singer, Dr. Frederick Seitz and also the Non-Intergovernmental Panel on Climate Change (NIPCC).  Dr. Singer’s first critique of the UN IPCC’s Fourth Assessment Report was titled Nature, Not Human Activity, Rules the Climate, and it listed 24 contributors from 14 countries and included a foreword by Dr. Seitz.   Climate scientists from NASA, Stanford University and Princeton who were contacted by ABC News dismissed the NIPCC report as “fabricated nonsense.”

The “fabricated nonsense” bit arises solely out of a March 23, 2008 ABC News piece titled “Global Warming Denier: Fraud or ‘Realist’?”, in which ABC’s viewers were never told who the NASA, Stanford and Princeton scientist accusers were, or how those scientists proved the NIPCC Report was either a fabrication or simply nonsensical. As seen in the balance of PNM’s response, they feel consensus validates the conclusion put out by IPCC scientists.

Lovely. The largest electricity provider in the state of New Mexico, PNM Resources,  apparently has a global warming policy that was significantly influenced by a single line out of a news report, and is otherwise shored up by little more than a ‘show of hands’. Their email to me had no restriction about reproducing it, and they went dead silent on my subsequent follow-up email questions.

By all means, feel free to use my set of questions to find out how many more public figures, politicians, groups or corporations are able to defend their ‘pro-global warming’ positions. Wouldn’t it be even more interesting if a professional pollster posed those questions in order to see how many end up looking like a deer caught in the headlights.

** [2/11/14: To their credit, after a delay of several delays, the comment I submitted was seemingly resurrected from its “deleted” status and was ultimately accepted for online public viewing sometime around the morning hours Feb 8th, contrary to what its timestamp indicates. The Hewlett blog moderator did not acknowledge any problems with “deletions” until my 2/10/14 comment was allowed to be seen. Whether he is able to successfully defend his position about the deletions remains to be seen, my reply is “awaiting moderation” at the present time.] [2/15/14: Click on the actual url link to my reply now, and you see the same results as I showed at the top of my article: “This comment was deleted“. Screencapture of my 2/11 reply here, verbatim text for easier reading in this downloadable file.]