The process of electing the anti-Romney is almost complete!

As the winnowing process has proceeded [alas, with both bumps-along-the-road and lingering-regrets], The Newt has accepted endorsements from Perry [who will head-honcho his Federalism initiative] and from Cain [who will focus on his economic/jobs policies].  This has allowed for “past sins/oversights” to be undermined behaviorally; to whatever degree is he was Big-Government oriented, or to whatever degree he was focusing as a lobbyist/historian, he now can project an approacch that would encompass the fundamentals of these two former-POTUS candidate/competitors…and of their supporters.

Meanwhile, in the shadows, Santorum has emerged as the “true conservative”…per anointment via the MSM/LSM/ELM [“Establishment-Leaning” Media].  He certainly has major faults [detailed elsewhere on this Diary] but, ultimately, this presents the final link in the chain, one that would unite all sub-facets of the party [eschewing Paul and his anti-“American Exceptionalism” foreign policy].  How might this be accomplished?

The Newt and Santorum are, per both parties, long-term friends.  One argues he is “senior” and the other argues he is “untainted.”  this can be perceived as a stand-off posture that, itself, can be presented to the GOP-electorate for a plebiscite.  Excluding all that Mitt projects, as the “class-warfare” argument continues to rage, would not adversely affect this model.

It would be shocking and would provide many people considerable surcease…were The Newt and Santorum to announce a “marital” relationship.  They could simply agree to abide by the [un-impassioned] votes of the entire GOP-POTUS primary-electorate.  Whomever gets more delegates would win those of the other, with the “ticket” completed by the guy who “places.”  [No one would lament that Mitt would merely have “showed.”]

This would allow for the definable-deficiencies of each to be ameliorated behaviorally.  Complaints about the 3-wives are off-set by Perry’s reminder that the most religious people are forgiving…and by Santorum’s confirmation of this process.  Complaints about the lack of true-achievement are off-set by Cain’s reminder that Santorum shares his passions…and by Santorum’s confirmation of this acceptance.

Immediately, the healing process would transpire, and Mitt could again use the CPAC-podium to “suspend” [forever] his negativity, flip-flops, aloofness, and inability to articulate fundamental-conservatism.

The “ticket” could then demonstrate the ability to work in-concert and project an image of a government-in-waiting, comparable to that which Bush-’43 was doing in November/December of 2000 [while the appellate process was rising to the SCOTUS].  Although some might consider this to be a weakness [creating unnecessary vulnerabilities], a “Cabinet” of sorts [without czars] could be tentatively assembled, reflecting again the eagerness to get-started on 1/20/2013; these individuals would then become surrogates for a public-policy “platform” which would mesh with that which the GOP could adopt in August.

Because the GOP followed the D’s in ’08, it is my understanding that we go first this year, so we would probably not be able to “benefit” from knowledge of whether Hillary could replace Biden [as if this could carry great import on the Veep-choice, anyway]; her latest photo is certainly not flattering. 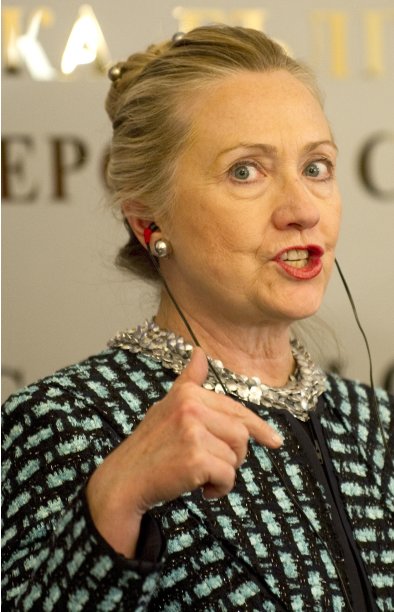 Regardless, the unprecedented nature of this effort [recalling only the choice by RR of Schweiker in ’76] would become invigorating, recognizing that any needed disclaimer could be diffused by alluding to Lincoln’s “Team of Rivals.”

This would create friendly-competition, allow for continuing clarifications, and allow for Mitt to become the pariah he has allowed himself to become, by failing to make peace with [1]–The Conservative Base, [2]–The Evangelicals, and [3]–The TEA [Taxed Enough Already] Party Movement.

And this would unite the GOP prior to Debate #20, stumping the pundits and yet allowing for ongoing discussion focused upon which of the two should be the star-contender.