Peace-minded Israeli reaches out to everyday Iranians via Facebook 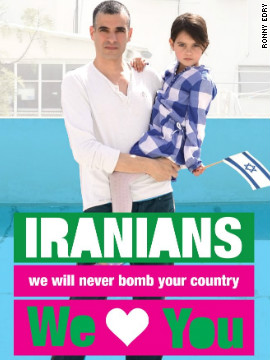 …Ronny Edry, an Israeli graphic designer based in Tel Aviv, to get his message across to the people of Iran.

“My idea was simple, I was trying to reach the other side. There are all these talks about war, Iran is coming to bomb us and we bomb them back, we are sitting and waiting. I wanted to say the simple words that this war is crazy,” said Edry.

…The response, said Edry, was overwhelming. “In a few hours, I had hundreds of shares and thousands of likes and it was like something was happening.

“I think it’s really amazing that someone from Iran poked me and said ‘Hello, I’m from Iran, I saw your “poster” on Facebook,’ ” Edry said.

…Edry says he started the campaign to get past the harsh words and talk directly to Iranians to see whether there really was anything to fight about.

I know Redstaters don’t need to be told how dumb the above is, so forgive me for posting this partly as a cathartic vent, but I also think it’s important for us all to be reminded just how pathetically and dangerously naive some people are with regard to threats to our security, to our friends and allies, and to our vital economic interests, lest we lazily assume that such idiocy can’t go somewhat mainstream if we don’t diligently point out how dumb and dangerous it is.

And of course, we have like-minded people in the U.S. (and I’m using the word “mind” loosely) — one of them is even among the remaining four Republican presidential candidates, although he should go back to the Libertarian Party where he belongs, particularly when running for president.

Again, forgive me for stating what is probably obvious to readers here, but thinking (again, using language loosely) such as that demonstrated by that Israeli and others aboard his bandwagon is dangerous for two reasons:

First, anything that, in the estimation of the Iranian leadership, affects Israeli and/or U.S. politics such that it reduces the probability that Israel and/or the U.S. will strike to delay/diminish Iran’s ability to develop nuclear weapons increases the probability that they will pursue developing such weapons, leading to much greater risk of enormous loss of Israeli and other lives, and the likelihood of much greater injurious influence/intimidation of Iran in the region and throughout the world.

Second, even if the efforts of this individual and his fellow clueless, feel-good band of idiots succeeded in getting most ordinary Iranians to feel less antipathy toward Israel, and even if it got more ordinary Iranians to strongly and vocally oppose the development of nuclear weapons and to push the leadership to cooperate fully with IAEA inspectors (and I don’t know if this idiot is going even that far in terms of thinking this through), here’s a news flash for the born-yesterday crowd: Iran is not a real democracy (or republic). It wouldn’t matter even if a majority of Iranians were on board with such an agenda. That’s Khamenei’s call (with, I suppose, the theoretical possibility of being, in effect, overridden by the clerics of the “Assembly of Experts” who supposedly can replace him), and I don’t think Khamenei feels much restrained by popular preferences when they conflict with his priorities.

This mentality and dynamic are nothing new, of course. I was a representative in my university’s undergraduate student government back in the heyday of the “nuclear freeze” movement in the mid-1980s. By far the most contentious and publicized debate and vote was on whether or not to call on the university to divest from companies that were involved in America’s nuclear weapons program (even as just a relatively small part of their businesses — e.g., IBM). I led the fight in the debate against this divestiture on the basis that the intention of the resolution and of the nuclear freeze movement of which it was a part was unilateral disarmament by the U.S., and such unilateral disarmament would increase the chances of nuclear war, increase the chances of war generally (e.g., making Soviet aggression toward Western Europe more likely, given their vast superiority in tanks and superiority in conventional forces generally there), or alternatively lead to greatly undesirable capitulation to the Soviets (to avoid war with them) at the cost of freedom of perhaps many millions of people, enabled by an emboldened Soviet Union no longer facing a U.S. deterrent. My side succeeded in defeating the resolution, but student governments at some other universities passed such resolutions (I don’t know the extent to which university administrations acted accordingly).

Part of what drove the nuclear freeze movement was the naive belief that “if the people could just get the leaders out of the way”, enduring peace would prevail, because people don’t want war, let alone nuclear war. As with the subject of this diary, people then seemed to forget that public opinion in the Soviet Union didn’t matter much to the leadership’s decisions regarding nuclear weaponry or other policies affecting the threat the Soviet Union posed to the U.S., our allies, and other nations throughout the world.

There is one exception to all of the above — the prospect of revolution via popular uprising. I’d applaud if, instead of saying “We won’t bomb you”, the message had been “Your leadership, which you hate anyway, is forcing us to bomb you, so rise up and throw them out!” But of course, such an idea, although relatively simple, involved a move or two too many for the mind of such a naive simpleton.

What They Say Is an Attack On the LGBT Community Isn't an Attack, It's a Defense

So, That's Why Alec Baldwin Thought He Could Point a Prop Gun at People and Pull the Trigger
Townhall
'CNN's owner speaks': After Ron DeSantis hurts Brian Stelter's feelings, Nick Sandmann stops by to finish the job
Twitchy
A Big Electoral Shift Shows That Democrats Have Overplayed Their Hand Going Into 2022
Redstate
Ugly: He Urged Jan. 6 Protesters to Attack the Capitol, but Is This Instigator Really a 'Fed! Fed! Fed!'?
PJ Media