Leaving Michigan families out in the cold (literally) 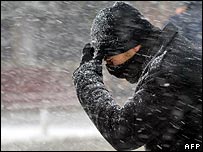 Still smarting over last year’s $1.5 billion Democratic tax increase?  Are you one of the 20,000 people who lost her home last month or the other 16,000 who lost it so long ago you finally stopped looking for a new one?

Do you know anyone who is having a hard time paying her bills?  Know anyone who has to choose between his prescriptions and groceries?  Anyone who can’t afford to keep the lights on and food on the table?

After yesterday’s action in the Michigan legislature and Jennifer Granholm’s eager cheerleading we’re all about to know a lot more people in a lot worse shape.  Start chopping wood and getting that fireplace ready.  Before they tax that too.

Just in time for another one of our legendary winters, the Democrats in the House of Representatives (and, sadly, a few Republican bums in the Senate) took a series of votes yesterday to dramatically raise the electricity rates on Michigan moms and dads while killing competition and guaranteeing an energy monopoly with zero oversight.

A package of three bills dramatically changes the way Michigan utilities are regulated, giving the state’s two largest power generators — DTE Energy and Consumers Energy — near monopolies in the markets they serve and allowing them to raise rates with no oversight until after the fact.

The utilities are guaranteed at least 90% of the state’s electric market under the changes.

But wait, there’s more.  The package also shifts some fees away from businesses and directly onto residential consumers and imposes new tax hikes to fund “renewable” energy.

Estimates vary but the average Michigan homeowner is expected to pay over $150 more a year to keep the lights on and the furnace running.  Testimony before the House indicated that 22% of the state’s residents are already behind on their energy bills.  That number is about to grow and a lot of folks are literally going to be left out in the cold.  The Detroit News reports:

The strict limits on competition “will create the largest residential rate increase in Michigan’s history,” said Barry Cargill, executive director of the Customer Choice Coalition, a group of businesses that favor competition. He estimates the overall impact of the two bills will be an increase of $475 million a year for utility customers, which amounts to $13 a month for DTE customers and a little less for Consumers ratepayers.

Sen. Wayne Kuipers, R-Holland, who voted against the bills, said: “This will result in massive rate hikes at a time when we can least afford it.” He said in the wake of 8.9 percent unemployment in the state “what do you say to those who “ have just lost their jobs and now ask, ‘How can I pay for this?’

Well, Senator, you tell them to join the club.  It is expanding rapidly.

We’ve got the monopoly for Consumers and DTE.  We’ve got the new Democratic tax hike / surcharge to fund their government mandated “green” guilt projects.  We’ve got rapidly rising rates on residential customers.  But maybe worse than all of that is the lack of oversight.  The Big Two can now, literally, raise rates whenever they’d like and with the lack of competition we are left holding the bag.  There’s no other game in town.  Pay their exorbitant rates or freeze in the dark.

It is an especially cruel fate for families at or below the poverty line and seniors on a fixed income.  The same folks Democrats tell us time and time again they want to “protect” are going to pay just as large a rate increase as those who are more fortunate.  And while there are some who can cut back on their Christmas shopping or buy fewer back to school clothes for their kids, there are others just plain out of holes in their belt.  They can’t tighten it any further.

For those in Michigan who can least afford it, this is going to be one long, cold winter.

Biden Sent McCarthy a Staff Memo to Negotiate the Debt Ceiling. It Did Not Go Well.
Townhall
Ryan Long stunningly and bravely reveals 'the harassment men have to deal with at the gym'
Twitchy
BOMBSHELL: FBI Searched the Penn Biden Center in November, White House Misled the Public
Redstate
Insanity Wrap: We Need to Talk About That Trans Figure Skater
PJ Media