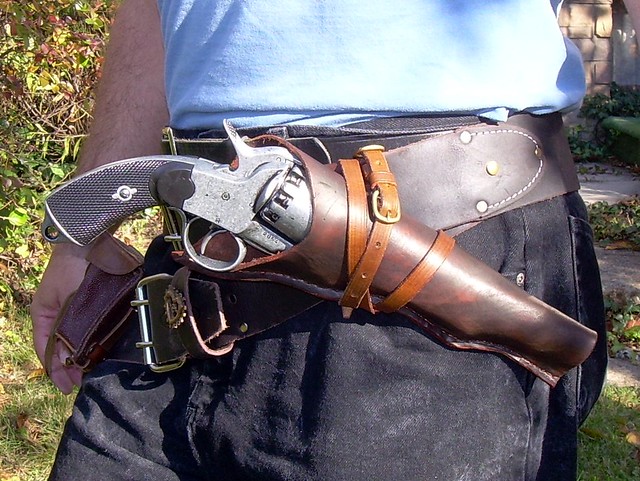 Elections do matter. At least they do in some instances. The grand state of Texas has a New Year’s Resolution, probably the best of any state anywhere unless you can find me one better. Texas, with the signature of her new Governor, Greg Abbott, will officially permit citizens to open carry next year if everything goes according to plan. You can hear Blue State people shuddering in revulsion at the mere thought.

Believe it or not says Ripley, Texas has banned the side arm in public for 140 years. Even stranger, with the public image of Texas being what it is – it is only one of a few states that has such a ban. It is just one of a small handful of (mostly large states) California, Florida, New York, Illinois and South Carolina and of course, the District of Columbia, that still prohibit public holstering. Of course, there is a distinction with regards to long guns.

California, on the other hand, did in fact have a provision for legal open carry for most of its history, until in 1967, when it banned open carry of loaded firearms and then more recently in 2012 and 2013, prohibiting even unloaded firearms to be open carried. But since the State of Illinois’ got shot down in December 2012  you could say, by the 7th Circuit Court of Appeals, on essentially the same law as California’s – the fat lady may not have yet sung in the Golden State.

Blue States such as Massachusetts, Maryland and Connecticut, as you can see from this map, require obtaining permits – but then again, so do Oklahoma, Georgia, Utah and Tennessee. And in fact, with reference to the bill he expects to see on his desk, Texas Governor Abbott has stated, “If open carry is good enough for Massachusetts, its good enough for the state of Texas.”

Surprisingly, to me at least, were the greater number of states that permit concealed carry under the “Shall issue” franchise and the fewer that retained the “May Issue” provision.

A note of explanation. According to ConcealedCarryClass.net, Shall Issue means that as long as you pass basic requirements set out by state law, the issuing authority (county sheriff, police department, etc.) shall issue you a permit. May Issue means that you must pass basic requirements and the issuing authority may issue you a permit.

So, ‘Shall Issue’ is virtually the same as ‘must issue’ so long as the basics are met. ‘May Issue’ however, brings with it the complicated and arbitrary matter of the governing authorities deciding whether your explanation of why you need a permit meets their subjective discretion.

This is being challenged successfully in a number of jurisdictions, most recently in San Diego, California, where the 9th Circuit Court actually ruled against the San Diego Sheriff’s office and instructed that the Sheriff’s reliance on the California ‘May Issue’ law violates the 2nd Amendment.

Because of this, the entire structure of the ‘May Issue’ law status across the state is threatened and other Sheriff’s Departments are changing their policy even before the State once again attempts to challenge the ruling. All of it has a chance of finding its way to the U.S. Supreme Court, where decisions in recent years have not been kind to the gun control lobby.

But back to Texas, where we started. The open carry bill is just one of a number of new gun laws before the new Texas legislature and the new Governor in 2015. Some other measures include those that would prohibit cities and counties from restricting gun rights and declare any new federally imposed limitations on firearms illegal in Texas.

In addition, conservative lawmakers in Texas have a statutory strategy to make it possible for school administrators and teachers that are willing, trained and qualified to do so, to arm themselves in defense against school shootings.

Overall, the anticipated new laws in Texas are in step with a national trend towards more alignment nationwide with the freedoms enshrined in the Constitution.

A note of caution is in order. The national mass media is still not favorably disposed towards less control of personal ownership and use of firearms. They will look to every opportunity to sensationalize instances where people don’t take personal responsibility for safety and discretion – whether it be open carry or concealed.

Our job as gun owners is to show leadership in the areas of education of the public and best practices. We don’t want to give the enemies of firearm freedom any easy ‘ammunition’ against us.

Get the Net: Hardball Host Loses His Mind in Insane Attack on McCarthy, Scalise and Stefanik
Nick Arama