Think Ebola airborn transmission is impossible? Don't bet your life on it. 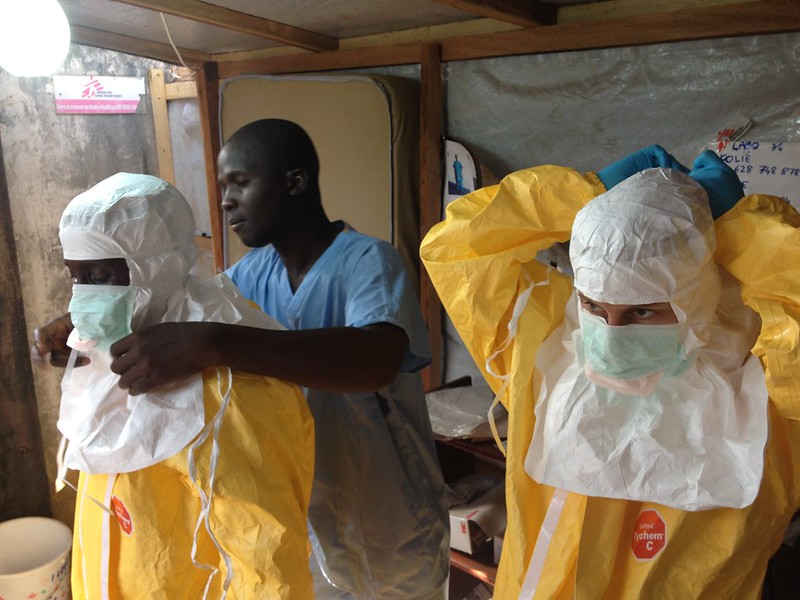 As news about the Ebola virus that has come into this country from West Africa continues to occupy the forefront of the stories most reported in the mass media, one previous near certainty about the epidemic is falling by the wayside. That is the conventional notion among medical authorities that Ebola cannot be transmitted through airborn contagion.

Dr. Thomas Frieden, director of the Centers for Disease Control and Prevention, testified in Congressional hearings yesterday that he was confident Ebola would continue to spread exclusively through bodily fluids. “We don’t believe it is spreading in any other way. We are confident this is not airborne transmission.”

Of course, one might consider the source – an embattled agency head, that has had a run of fumbles in managing public health safety. The latest episode is the authorization for Nurse Amber Vinson, who had a high fever but not above 100.3 degrees.

Here is a glaring contradiction. Experts say that Ebola is only transmitted by direct contact with the mucous, saliva, blood, urine, semen, sweat or feces of the infected individual. And not just contact, but these bodily fluids must infect you through your eyes, nose, throat or through a cut or scratch on the skin.

But, public health officials are now seeking to contact people who traveled on the same flight out of concern the virus could have spread, and Frieden said he would pursue new actions to limit travel for people in close contact with Ebola patients.

This begs the question that absent any of the above conditions and excluding airborn contagion, how would it be possible for anyone on those flights to contract Ebola? Unless the CDC is not as certain of the standard story they are passing out to the public.

The conventional wisdom on airborn transmission of the virus, is based on a premise that assumes what was thought to be true is not subject to revision. “Ebola is more-or-less the same as it was in 1976,” when it was discovered, Ian Jones, professor of virology at the University of Reading in the United Kingdom, told The Wall Street Journal. “Most viruses, once they’ve established a way of life, stick with it.”

“We can never say never, but I just don’t think the risk is very high,” said Thomas Geisbert, professor at the University of Texas at Galveston who co-discovered the Reston strain of Ebola.

However, more medical professionals are expressing doubt regarding what’s possible and what’s not with regard to Ebola and are not operating on the assumptions based on past behaviors of the virus.

Professor Dr. David Sanders, in the Biological Science department at Purdue University, told Fox & Friends on Wednesday that while there is no evidence at the moment that the virus has airborne transmission, there continues to be the possibility that it will mutate even if the risk is low.  “Our own research that we published with our collaborators, demonstrates that Ebola has the inherent capacity to enter lung tissue, human lung tissue, just as influenza does.”

And there are epidemiologists who not only acknowledge the possibility of airborn contagion, but are even more positive that it is a risk that has to be accounted for.

An expert on the diseases African origins and that has researched previous iterations of the virus, says that his studies on the outbreak in the Congo in 1995, showed some evidence that Ebola had been transmitted through the air. “We just don’t have the data to exclude it,” Dr. C.J. Peters, a professor at the University of Texas at Galveston, told the Los Angeles Times.

“Your body fluids have to go through the air, unless you touch somebody. You generate an aerosol if you cough or sneeze or vomit or have explosive diarrhea — and it makes droplets of different sizes. The ones that are really, really tiny can get through your mask, around your mask, down into your lungs,” Orient said, adding that these droplets could infect “target cells down in your lungs.”

And in a final note of caution, the Public Health Agency of Canada issued a statement on its website regarding new findings resulting from laboratory research they conducted:

“In the laboratory, infection through small-particle aerosols has been demonstrated in primates, and airborne spread among humans is strongly suspected, although it has not yet been conclusively demonstrated . The importance of this route of transmission is not clear. Poor hygienic conditions can aid the spread of the virus.”

“Has not yet been conclusively demonstrated.” The Guinean EBOV strain, which is the strain of the virus that medical professionals are confronting, is a new strain of Ebola. The safest assumption that you can make about it is that the established rules of the road regarding transmission may have changed.

As a practical matter, it should be taken into account that the CDC and the World Health Organization (WHO) are not in full agreement on the factors of transmission. All are agreed that it is at least theoretically possible to contract a virus like Ebola as a consequence of touching a surface that an infected Ebola victim has sneezed or somehow ejected mucous onto and then touching one’s eyes or mouth. They also admit the possibility that if for instance an infected individual were to sneeze or cough close to your face, you could contract it.

A reasonable precaution to take whenever in public areas, is to routinely apply an anti-bacterial hand sanitizer of the portable type and disinfectant wipes on surfaces that you don’t trust –  like the ones provided at the supermarket to clean the handle and seat of the shopping cart. Why? Because estimates range from several hours to even a day, the time that a virus is still actively contagious on a surface.

Take care, take precaution and take the prevailing wisdom on Ebola with a healthy grain of salt.

Democrats Go to War With the Catholic Church
Bonchie