Supreme Court: Signs that Stevens May Be Retiring?

Is this the way a 33-year run on the Supreme Court will end? Not with a bang but with whispered speculation about clerk hires? 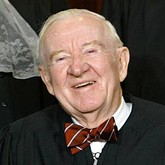 It seems like, well, maybe. According to an AP story out Wednesday, Supreme Court Justice John Paul Stevens has hired fewer law clerks than usual, generating speculation that the leader of the court’s liberal wing will retire next year.

The old law-clerk-hiring-as-early-detection-system isn’t always foolproof, but it worked with Justice David Souter. His failure to hire clerks was the first signal that he was contemplating leaving the court. Shortly after that news broke, Souter made the announcement of his departure.

Stevens, 89 years old, joined the court in 1975 and is the second-oldest justice in the court’s history, after Oliver Wendell Holmes. He is the seventh-longest-serving justice, with more than 33 years and eight months on the court. He is also a member of the Law Blog’s Bow Tie Club.

In response to a question from The Associated Press, Stevens confirmed through a court spokeswoman on Tuesday that he has hired only one clerk for the term that begins in October 2010. He is among several justices who typically have hired all four clerks for the following year by now.

Obama may get distraction from health care with this news and its sure to fire up liberals.  We may a huge fight on our hands here.