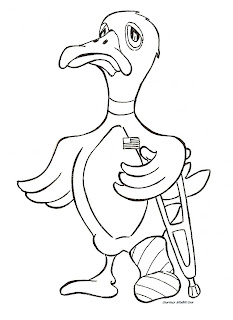 Lane Kirk is a lame duck. There has been an election for the Massachusetts US Senate seat, and Scott Brown won the election. There is a lot of outrage that Lane Kirk is continuing to cast votes. I understand that outrage. My take on this is different from others that I have read. I want to take into account ALL lame duck US Senators, and not just Lane Kirk. The heat that I can catch for this kind of accounting may be huge, because it does not necessarily reward one political party over the other one.

I do not favor imposing mandatory term limits on congressmen. We already have a market-driven set of term limits. They are called general elections. They occur every two years for the House and 1/3 of the Senate so the voters can remove any House member after two years in office and any Senate Member after six years in office. This is the check on power that the founders had the wisdom to put into the constitution, and I am good with that. The check is that any judgement made by a congressman’s vote is that he has to face the voters in the next election, and defend his vote. Now the problem with this particular check comes into play when you have a congressman who is not going to run in the next election or whose seat just got won in the previous election by another person. What I have described is a lame duck who has no concern for accounting for his vote to the voters in his state.

My take is that the US Senate can make their own rules with a 2/3 majority vote required. I would like to see them come up with a Senate Rule that a lame duck member will recuse himself, and not vote on key major votes. If Supreme Court Justices are allowed to recuse themselves, then why shouldn’t a lame duck US Senator?

Gretchen Whitmer Blames Everyone but Herself for COVID Increase
T.LaDuke

The Responses To This Slate Writer's Call To End Outdoor Masking Tell You All You Need To Know About The Left
Townhall
BOOMAGE! Megyn Kelly has a serious warning for Heads of School determined to shove Critical Race Theory down students' throats
Twitchy
Joe Biden Takes Inane Mask Hysteria to Another Level
Redstate
BREAKING: Three Dead in Austin 'Active Shooter' Incident
PJ Media