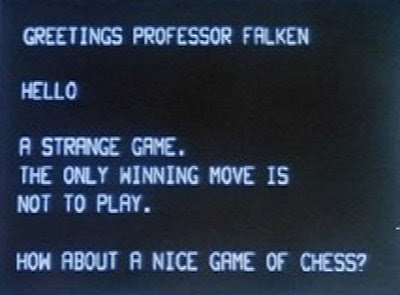 For those who are wondering, the pic is from the movie War Games (1983).

There has been some talk about a purity test for candidates. Some people are in favor, and some are opposed. Put me in the camp that says Do not play this game! I recently read an article at Politico,
Dem plan: Split GOP, tea party
From the article:

Menendez and his staff will distribute a memo Tuesday advising Democratic campaign managers to frame their opponents early and to drive a wedge between moderate voters and tea-party-style conservatives.

The memo urges Democratic candidates to force their opponents to answer a series of questions on health care, taxes and some of the favorite causes of the far right:

Do you believe that Barack Obama is a U.S. citizen? Do you think the 10th Amendment bars Congress from issuing regulations like minimum health care coverage standards? Do you think programs like Social Security and Medicare represent socialism and should never have been created in the first place? Do you think President Obama is a socialist? Do you think America should return to a gold standard?

This is not anything new. Saul Alinsky included this in his Rules for Radicals Rule #7 Tactics point 4

4.Make the enemy live up to its own book of rules.You can kill them with this, for they can no more obey their own rules than the Christian church can live up to Christianity.

The MSM will try to trap a GOP candidate or GOP officeholder in this same manner. I recently read a book written by William F. Buckley, The Reagan I Knew. There is a chapter titled Stockman and the Budget. An excerpt

Reagan was pleased to find in Washington a 34 year old congressman, David Stockman. He had done graduate work at Harvard, where for a period he was in the divinity school. Reagan duly named him Director of OMB and put him in charge of the administration’s grand plan to cut tax rates and the budget and the deficit simultaneously.

Reagan’s confidence in Stockman came to a soggy end when The Atlantic appeared on the stands in November 1981. In an extended interview Stockman put forward his views of the Reagan program.

It’s kind of hard to sell ‘trickle down.’ So the supply-side formula was the only way to get a tax policy that was really ‘trickle down.’ None of us really understands what’s going on with all these numbers.

In the months ahead, administration representatives had to labor hard to finesse the objections raised by Stockman. Stockman went to the president, apologized, offered his resignation, was ‘taken to the woodshed’ and then forgiven, and went back to work. But although Stockman was kept on as head of OMB until 1985, the skepticism had hardened.

Stockman enjoyed the arts of explication. His conservative instincts brought him to criticize mostly the sheer size of the government President Reagan had inherited. It took Stockman a very long time before he discovered that the Reagan administration, for instance, simply stopped thinking about Social Security as a malleable budget feature. If he had known that, he says, he would not have engaged in the struggle to begin with.

I think WFB sums up what happened fairly accurately, and I also think President Reagan would have been served better by someone who was not such a conservative radical ideologue.
Cross-posted at The Minority Report

As Maxine Waters Calls for Riots in the Streets to Continue, Minnesota National Guardsmen Shot At
Townhall
Enemy of the people? Utah journo goes to paramedic's house to ask about his $10 donation to Kyle Rittenhouse
Twitchy
Dr. Fauci's Ridiculously Unscientific Rantings Are Reaching Dangerous Levels
Redstate
Dr. Fauci Does Damage Control on Sunday Show Circuit After Getting Torched by Jim Jordan
PJ Media