Take the Cap Off Entering the House

Most of the framers of the Constitution and the Bill of Rights (and the states that ratified them) expected that the following principles would always apply:

The size of the congressional districts should remain relatively small. Instead, the average district size is approximately 700,000 and growing.

The Congressional districts should be equivalently sized across the nation pursuant to the one-person-one-vote principle. Instead, some House districts are currently nearly twice the size of others.

We may approach a great way towards perfection by increasing the representation and limiting the powers of Congress. The great interests and liberties of the people could only be secured by the State Governments. If the new government was only confined to great national objects, it would be less exceptionable; but it extended to every thing dear to human nature. That this was the case could be proved without any long chain of reasoning:–for that power which had both the purse and the sword, had the government of the whole country, and might extend its powers to any and to every object. By the true doctrine of representation, this principle was established–that the representative must be chosen by the free will of the majority of his constituents: It therefore followed that the representative should be chosen from small districts. Would they be possessed of the requisite information to make happy the great number of souls that were spread over this extensive country?–There was another objection to the clause: If great affairs of government were trusted to a few men, they would be more liable to corruption. Corruption was unfashionable amongst us, but Americans were like other men; and tho’ they had hitherto displayed great virtues, still they were men; and therefore such steps should be taken as to prevent the possibility of corruption. We were now in that stage of society, in which we could deliberate with freedom;–how long it might continue, God only knew! Twenty years hence, perhaps, these maxims might become unfashionable; we already hear in all parts of the country, gentlemen ridiculing that spirit of patriotism and love of liberty, which carried us through all our difficulties in times of danger.–When patriotism was already nearly hooted out of society, ought we not to take some precautions against the progress of corruption?

Complaint For Declaratory and Injunctive Relief On the grounds that the United States government’s current practice of apportioning representatives according to 2 U.S.C. § 2a is unconstitutional, a lawsuit was filed in district court on September 17, 2009.

The five plaintiffs in the case each represent the five most under-represented states in the House of Representatives. The plaintiffs are:

Scott Scharpen has written about the root causes of ills in the US House, and here are some highlights from this article.

INCREASED competition – the principles of free markets tell us that when competition is present, we get increased quality at a lower cost. With a House of 1,761 members, the supply will increase by over 300% while the demand remains the same. The example of the New Hampshire state house (consisting of 400 members for a population of less than 1.5 million) shows that competition produces a much higher turnover rate (over 30%) each election cycle. In dramatic contrast, California’s embarrassing lack of competition (the state assembly has only 80 members for a population of over 36 million) has produced a 100% incumbent success rate for the past 4 election cycles, even though the state is being driven into bankruptcy. In effect, competition creates market-driven term limits when needed, rather than legislatively-forced term limits that are advocated by so many. With appropriate competition, long tenure will depend on strong performance rather than who holds the most power and money.

DECREASED cost of running for office – the average winning campaign for a U.S. House seat in 2008 was approximately $1.5 million. This enormous financial barrier to entry prevents ‘average’ citizens from entering national politics, and gives incumbents a great advantage. If the average district size were reduced by 75%, the cost to win a House seat would also be cut by 75%. Also, we would see special interest money playing a much smaller role in the outcome of elections.

Here is a thought experiment: consider how few people are required to get a major federal government program started. In a country of about three-hundred million residents, a US President only needs 283 people to get what he wants. Let’s take Obama’s health care initiative and break down the numbers. Any revenue generating program needs to originate in the House and get 218 votes – done Next, the Senate has got to have 60 votes to pass something out of the Senate – done. The House can accept with no changes what passed out of the Senate with 218 votes – not done yet. The President signs the bill received from the Congress – not done yet. Five Supreme Court Judges rule the new program is constitutional – not done yet. So a president needs 218 + 60 + 5 = 283 for mission accomplished.

There is a significant correlative relationship between smaller district sizes and increased freedom. Moreover, this is a causal relationship; that is, as the legislative districts become larger, the government becomes increasingly oligarchic and statist.

I support this effort, and wish that people would work to fix the statist problem our country faces with the elected officials in DC in this manner. I do not think that term limits and campaign finance reform address the core problem that arose in 1913 with creation of the Fed and the 16th and 17th amendments as well as no longer increasing the total number of congressional districts. I know the Congress we have has no interest in doing any more than having federal districts and territories get representatives instead of delegates. I do not support that at all.

Below I have a couple of charts to illustrate that the total number of congressional districts was increased every ten years from 1790 to 1910 (with a single exception). These increases were a direct result of the growth in total population as was intended by the framers of the Constitution and the Bill of Rights. 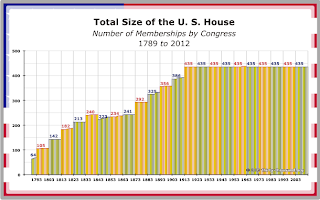 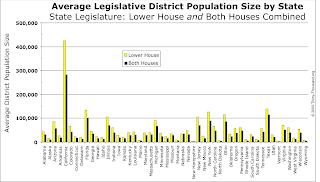