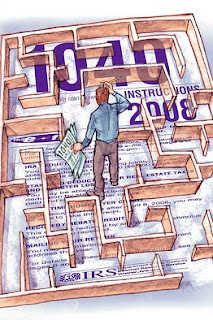 The number of pages of tax rules skyrocketed from 40,500 in 1995 to 70,320 in 2009. Congress is increasingly micromanaging society with special tax incentives for education, energy, and other activities.

Federal tax paperwork consumes 7.6 billion hours of time annually, which is like having a full-time “tax army” of 3.8 million people.

There are about 500 changes to the tax code every year as Congress and the Treasury churn out a never-ending stream of laws and regulations.

The share of taxpayers requiring professional help keeps rising, with 62 percent of returns completed by professionals in 2007.

It complicates decision-making in the economy, for example by confusing family financial planning and generating uncertainty for businesses.

It encourages an invasion of privacy by the government. Each new tax incentive requires special documentation, which exposes people to scrutiny by the IRS.

It results in frequent errors by taxpayers and the IRS. Individuals and businesses can get locked into battles with the IRS for years because of uncertain tax rules.

43 percent of U.S. households don’t pay any income tax as a result of all the low-income benefits in the code. Those people perceive federal spending to be costless, and thus they are little interested in tax reform or budget restraint.
source

Eliminate the progressive income tax – replace it with a flat income tax or a national sales tax – for its purpose is to redistribute wealth, not fund the constitutionally legitimate functions of the federal government.

All residents of the country must be required to pay the tax so they have a stake in limiting its abuse.

Eliminate the automatic witholding of taxes, for it conceals the extent to which the federal government is confiscating income from its citizens.

Eliminate the corporate income tax, for it is nothing more than double taxation on shareholders and consumers, and penalizes wealth and job creation.

Eliminate the death tax, for it denies citizens the right to confer the material value they have created during their lives to whomever they wish, including their family.

All federal income tax increases will require a supermajority vote of three-fifths of Congress.

Limit federal spending each year to less than 20 percent of the gross domestic product.

Reduce the civilian federal workforce by 20 percent or more.

Replace the progressive income tax with a dual rate income tax. Under the plan, the individual income tax would be turned into a two-rate tax that eliminated most deductions and credits. Individuals would be taxed at a low 15 percent rate on income up to about $100,000 (singles) and $200,000 (married) and 27 percent above those thresholds. I fear a national sales tax would become just as huge in no time as our current tax code. The opportunities for Congress to do social engineering with respect to different kinds of commodities and what tax would be applied to them is too great IMO. I also agree with Adam Smith that I do not object to wealthier individuals paying more to finance the legitimate functions of government.

In addition to the supermajority votes in Congress I would require that any tax increase bill must include a detailed explanation of how the bill is limited to dealing solely with the enumerated powers that Congress possesses.

I would have the date for the general election changed from the first Tuesday in November to the third Sunday in April. This would cause the election to occur in close proximity to Tax Day, April 15th, and a larger number of aroused citizens would show up to vote at polls.

The cynical side of me thinks that this will not happen in my lifetime. There are a lot of perks that the Washington, DC establishment are enjoying from the deals they can work out with special interests in fine tuning and writing of additional code into our US tax code. This is true for both Parties. Perhaps the Tea Party movement can provide the impetus to change the business as usual in our Nation’s Capitol.

The White House Just Changed the Threshold for IRS Snooping on Bank Accounts
Townhall
Terry McAuliffe's terrible, horrible, no-good, very bad campaign gets WORSE as he flips out during interview, scolds reporter and storms off (watch)
Twitchy
Katie Hill, Congresswoman at the Center of "Throuple" Scandal, Is Having a Child with the Reporter Who Ran Interference for Her
Redstate
Math Is Hard: L.A. Leftists Lose Millions Writing Traffic Tickets
PJ Media