How Al Sharpton Led Me To Oppose Term Limits 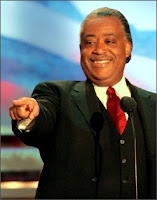 This all started on Sunday morning as I switched through the TV channels I caught an exchange on This Sunday between Al Sharpton, Ron Brownstein, and George Will. Ron Brownstein said that there are many people who are attending Tea Party events and Town Hall meetings to express their anger over a government that is trying to take control of too much of their lives and spending too much. Al Sharpton said that people are right to want protection by the government. Brownstein answered that there are people who want protection from too much government. George Will agreed with Brownstein, but Al then said that debate is over since there was an election and we won. Then George Will answered that is why the founding fathers had the wisdom to make an election occur every two years.

This little exchange got me thinking about services and controls and the corresponding tax burden put upon taxpayers for it. I thought that in addition to an election occurring every two years there are also people voting with their feet. By that I mean that people are just moving out of a state that bundles numerous high-quality public benefits with high taxes and into a state that offers packages of low benefits and low taxes. They are not waiting on an election to get a government that best satisfies their set of preferences.

I came across an excellent column at the City Journal, The Big-Spending, High-Taxing, Lousy-Services Paradigm. This column compared the two most populated states in the US, California and Texas. California became the nation’s most populous state in 1962; Texas climbed into second place in 1994. They are broadly similar: populous Sunbelt states with large metropolitan areas, diverse economies, and borders with Mexico producing comparable demographic mixes. They are broadly different: California bundles numerous high-quality public benefits with high taxes and Texas offers packages of low benefits and low taxes. While Texas’s share of the nation’s population has steadily increased, from 6.8 percent in 1990 to 7.9 percent in 2007, California’s has barely budged, from 12 percent to 12.1 percent.

This is growing evidence that the low-benefit, low-tax alternative succeeds not only on its own terms but also according to the criteria used by defenders of high benefits and high taxes. Whatever theoretical claims are made for imposing high taxes to provide generous government benefits, the practical reality is that these public goods are, increasingly, neither public nor good: their beneficiaries are mostly the service providers themselves, and their quality is poor. The beneficiaries are mostly the service providers themselves is what got me to thinking about the consequences of term limits.

With tax revenues scarce and voters strongly opposed to surrendering more of their income, Texas officials devote a large share of their expenditures to basic services that benefit the most people. In California, by contrast, more and more spending consists of either transfer payments to government dependents (as in welfare, health, housing, and community development programs) or generous payments to government employees and contractors (reflected in administrative costs, pensions, and general expenditures).

The resistance to making California more like Texas comes from sitting state legislators, that like California’s public sector just fine the way it is and see reform as a threat to their comfortable, lucrative arrangements. It turns out, for example, that all the pointless boards and commissions are bulletproof because they provide golden parachutes to politicians turned out of the state legislature by California’s strict term limits. Until reading this column I had not considered this consequence of having strict term limits. I do recall Art Chance saying how these folks stay on the government gravy train in this labyrinth of government bureaucracy when they do not win elections. They have extra reasons to grow the government that I had not considered.

Then I went to look at the states with strict term limits, and see how they compare to California. I discovered this excellent website state health facts dot org. For State budget shortfalls in 2009 they ranked the 50 states and Washington DC with 51 being the highest budget shortfall and 1 being the lowest.

Here are the results of some of the states that have strict term limits:

Here are the results of some of the states that have no strict term limits:

I have never lived in any of these states with strict term limits, and if any resident disagrees with my thinking that this term limits idea is not working to get you a responsible government, then bring it. I do not think term limits will yield good government, nor do I think McCain-Feingold laws are going to yield good government. It is left up to We the People to be vigilant in electing folks of good character. We are in danger of losing more and more of our sweet liberty if we think the government should be providing more and more services to us. Those services are too expensive and are mostly beneficial to those elected instead of being beneficial to the voters.