Slouching Toward Compassion and a Tea Party 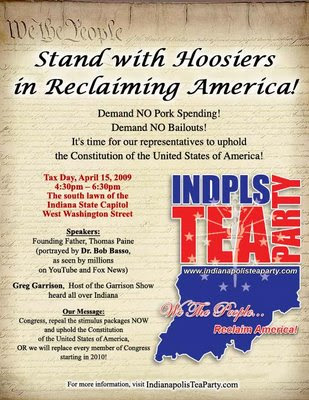 I just finished reading Slouching Toward Gomorrah and The Tragedy of American Compassion. I have also been thinking a lot about a Tea Party on April 15th, hence the title. Both of these books and what I have seen and read about Tea Parties indicate an American human condition that extends past partisan politics and current events. I now understand no immediate fixes of an election or SCOTUS change are going to make everything all better. There needs to be a pendulum swing back to core principles that do not have an expiration date.

Robert Bork wrote about radical individualism and radical egalitarianism he especially saw while teaching at Yale. The individualism he is talking about is no civil rules, accountability, or personal responsibility for actions by an individual. The attitude that if it feels good then do it. The radical egalitarianism he is talking about is how no one should achieve more, accomplish more, or obtain more wealth than another person. Those who do have more are required to give this up to those who have less so that social justice will be met.

Marvin Olansky wrote about the changes in caring for the needy from the time the Mayflower landed at Plymouth Rock to the present day. The major difference between then and now is the dominant view of human nature. Cotton Mather warned his church members in 1698: “Instead of exhorting you to augment your charity, I will rather utter an exhortation… that you may not abuse your charity by misapplying it.” His view, held for most of the 18th and 19th century by many, was that many persons, given a choice between working and not working, would choose to sit. He and others viewed the poor not as standing on the bottom rung of the social ladder, with the only choices stagnation or upward movement, but as resting in the middle, capable of moving either upward to economic independence or downward to defeated and dependent state of mind. I sure wish that had remained the dominant view.

Marvin Olasky writes an excellent musical scale from A to G of seven seals of good philanthropic practice:

B=bonding defined as a personal connection to a charity volunteer

C=categorization defined as seeing an applicant for charity as either

2. needing work rather than relief

3. not entitled to relief

F=freedom defined as the opportunity to work and worship without governmental restriction. Freedom grasped when an individual takes responsibility with his opportunity.

G=God defined as a recognition that true philanthropy must take into account spiritual as well as physical needs.

In 1947, Horace Greeley, founder and editor of the New York Tribune, is one of the first to lead people in the wrong direction we find ourselves in. “The heart of man is not depraved, his passions do not prompt to wrong doing, and do not therefore by their action, produce evil. Social distinctions of master and servant, rich and poor, landlord and land-less are the cause of evil. The way to end evil is to redistribute wealth so that all receive an equal share; one way to begin will be to have government tax the better off and distribute food and funds to those less well off.”

Edward Bellamy, author of Looking Backward, followed Greeley in 1888. In the novel Bellamy’s protagonist, Julian West, goes to sleep in 1887 and wakes in the year 2000. West, impressed by the equal division of abundant wealth in what has become an American socialist paradise, asks, By what title does the individual claim his particular share? What is the basis of his allotment? The wise denizen of the future, Dr Lette, replies, His title is his humanity. The basis of his claim is the fact that he is a man.

The theologian and key figure in the early 1900’s Social Gospel movement, Walter Rauschenbusch said straightforwardly, “God is against capitalism.”

Moving on to the Great Society era of LBJ, the National Council of Churches became one of the leading sellers of entitlement. Council reverends argued not only that all the poor had a right to a handouts, but that the better-off should be ashamed if they did not provide them. They argued that poverty was still with us because of the influence of unrestricted economic individualism. The council demanded that the federal government provide leadership in the creation of adequate mechanisms for income distribution and income maintenance in an affluent society. The NCC brushed off the biblical statement that the poor would always be with us, since it arose in the past when the primitive status of human technology and the scarcity of developed resources existed. Since then, however, technological breakthrough have allowed for adequate levels of living for all.

I especially appreciate this little nugget from Olasky:

It is the thought that counts. We are not supposed to think too long, however, since what could be called Nike philanthropy demands that we “Just Do It.” Cotton Mather’s exhortation “that you may not abuse your charity by misapplying it” has long been buried.


So I am going to go to Tea Party armed with a lot of powerful ideas from a couple of books I highly recommend. I know that T.E.A is an acronym for Taxed Enough Already, and I would like to add another acronym S.E.A. for Spent Enough Already. The long list of examples I’ve listed from the books I just read show an entitlement attitude has been cultivated for a long long time. This entitlement spending and mindset has hurt instead of helped the poor and needy. It will be better if the pendulum swings back so personal individual shame in moving downward to a defeated dependency is the mindset of the majority. It will be better if more folks see themselves in the middle rung of the social ladder with freedom of opportunity to move up to economic independence.

Trump Rising
Townhall
White woman fired after telling a Black man at a Brooklyn dog park to 'stay in his hood'
Twitchy
There's an Aesop's Fable About What the Dems Are Set to Do to Themselves
Redstate
FBI Narrative About the Jan. 6th Capitol 'Insurrection' Is IMPLODING
PJ Media