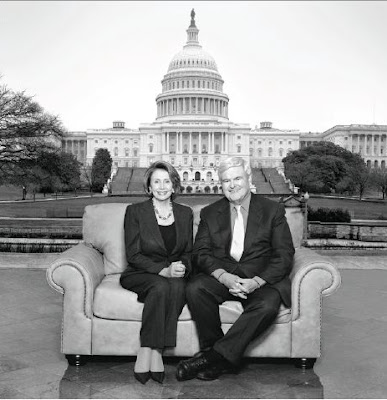 Anyone familiar with Monty Python understands where I got the title for this diary. The photo is a disturbing reminder of a flirtatiion that Newt Gingrich had recently with the “issue” of global climate change. The quote of the week below is hopefully a sign that he has gotten better.

QUOTE OF THE WEEK

I’ve lived through ’64, ’74 and ’92. In ’64 we were beaten so badly people talked about whether the party had a future. By ’66, Lyndon Johnson had gone so far to the left and split the Democratic Party and we gained 47 House seats and picked up a bunch of governorships and Senate seats. Since 1968 you have not elected an overt liberal in 40 years. In ’74 to ’76, we had Watergate and a bad recession and then a Reagan-Ford nomination fight. In that period, only 17 percent of the country identified itself as Republican and yet four years later, Reagan won a smashing victory and Carter collapsed under a bad economy. In ’92, Bush, having thrown away the fiscal conservatives by raising taxes, lost the three-way race and, two years later, we gained the House for the first time in 40 years and kept it. I know how fast the country can switch.

– Former House Speaker Newt Gingrich, reminding Newsweek’s Eleanor Clift that the nation’s political landscape can change at the drop of a dime

I wrote this diary to remind myself and readers that we occasionally need a history teacher like Newt Gingrich recalling that the nation’s political landscape has changed in the past, and it can change again. Too often we forget history, and we think we have some new problems that were never faced by anyone previously. Even Newt himself in recent years may have sometimes fallen into this trap of thinking Pelosi, Reid, and Obama are so different than Tom Foley, Robert Byrd, and Bill Clinton.

There is nothing new in the ideas liberals have today than what they had in 1964. For liberals it is all about acquiring power and control by growing the federal government, and by rewarding the special interest groups that spent the money to win the elections for them. These days the environmental activists, community organizers, NARAL, and GLAA have joined the union leaders and trial lawyers as the special interest groups of todays liberals. These ideas of achieving power and control over individuals is nothing new or even specific to any one kind of “ism.” You can read about it in history from as recent as Hugo Chavez to the time of King Louis XVI. The package through history has had different gift wrapping, but in its essence is the same thing.

So I hope that when Newt was reminding Newsweek’s Eleanor Clift that he also was reminding himself that his responses in the House in the early 1990’s are the same prescription that conservatives should use today.