Didn't that take some hubris, Charlie? 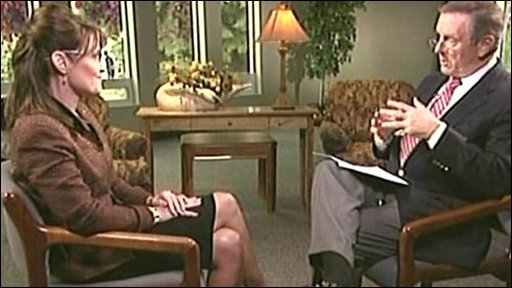 I watched the ABC World News program on September 11th, and my initial reaction was that Governor Sarah Palin acquitted herself well in the interview, and did no harm to the McCain/Palin ticket. I also thought Charlie Gibson was the caricature of the Washington DC media elite who believe that anyone who has not achieved membership in their “ruling class aristocrat club” through appearances on Sunday morning TV talk shows and Press Club speeches is not worthy.

Very early into the interview I almost threw something at my TV set over this exchange:

GIBSON: Governor, let me start by asking you a question that I asked John McCain about you, and it is really the central question. Can you look the country in the eye and say “I have the experience and I have the ability to be not just vice president, but perhaps president of the United States of America?”

PALIN: I do, Charlie, and on January 20, when John McCain and I are sworn in, if we are so privileged to be elected to serve this country, will be ready. I’m ready.

GIBSON: And you didn’t say to yourself, “Am I experienced enough? Am I ready? Do I know enough about international affairs? Do I — will I feel comfortable enough on the national stage to do this?”

PALIN: I didn’t hesitate, no.

GIBSON: Didn’t that take some hubris?

PALIN: I — I answered him yes because I have the confidence in that readiness and knowing that you can’t blink, you have to be wired in a way of being so committed to the mission, the mission that we’re on, reform of this country and victory in the war, you can’t blink.

So I didn’t blink then even when asked to run as his running mate.

Another reaction I had is that Governor Palin’s answers were short and to the point. I know that US Senators are more prone to doing a filibuster in their answers than kinds of folks, but still the answers were quite short. I was also puzzled by this comment from Charlie Gibson to Governor Palin:

GIBSON: And let me finish with this. I got lost in a blizzard of words there. Is that a yes? That you think we have the right to go across the border with or without the approval of the Pakistani government, to go after terrorists who are in the Waziristan area?

What’s Charlie talking about – a blizzard of words there? I was watching and listening to Governor Palin using less words in her answers than Charlie Gibson was using in his questions. But I got an explanation for this remark from Charlie about the blizzard of words thanks to Mark Levin

A transcript of the unedited interview of Sarah Palin by Charles Gibson clearly shows that ABC News edited out crucial portions of the interview that showed Palin as knowledgeable or presented her answers out of context. The sections edited out by ABC News are in bold. So with that in mind here is a portion of that interview right before Charlie made his blizzard of words comment with the edited out word I did not hear or read on ABC’s website version of the transcript.

PALIN: I agree that a president’s job, when they swear in their oath to uphold our Constitution, their top priority is to defend the United States of America.

I know that John McCain will do that and I, as his vice president, families we are blessed with that vote of the American people and are elected to serve and are sworn in on January 20, that will be our top priority is to defend the American people.

PALIN: Charlie, if there is legitimate and enough intelligence that tells us that a strike is imminent against American people, we have every right to defend our country. In fact, the president has the obligation, the duty to defend.

GIBSON: Do we have the right to be making cross-border attacks into Pakistan from Afghanistan, with or without the approval of the Pakistani government?

PALIN: Now, as for our right to invade, we’re going to work with these countries, building new relationships, working with existing allies, but forging new, also, in order to, Charlie, get to a point in this world where war is not going to be a first option. In fact, war has got to be, a military strike, a last option.

GIBSON: But, Governor, I’m asking you: We have the right, in your mind, to go across the border with or without the approval of the Pakistani government.

PALIN: In order to stop Islamic extremists, those terrorists who would seek to destroy America and our allies, we must do whatever it takes and we must not blink, Charlie, in making those tough decisions of where we go and even who we target.

GIBSON: And let me finish with this. I got lost in a blizzard of words there. Is that a yes? That you think we have the right to go across the border with or without the approval of the Pakistani government, to go after terrorists who are in the Waziristan area?

PALIN: I believe that America has to exercise all options in order to stop the terrorists who are hell bent on destroying America and our allies. We have got to have all options out there on the table.

So like the title of this blog reads, Didn’t that take some hubris, Charlie, to think that in this modern internet age you could edit the interview that showed Governor Palin as knowledgable or take her words out of context and get away with it?

CODE RED: Celebrate America! If You Run Out of Gruel, You've Got A "High-Class Problem"
Jim Thompson

Anthony Fauci Proven Wrong Again...by NBC
Townhall
Usually, Twitter LOVES to verify a progressive troll - that they have NOT verified this d-bag speaks volumes.
Twitchy
The 'Let's Go Brandon' Craze Gets Serious as Threats of Retribution Loom
Redstate
Canada Has a Problem With Brandon
PJ Media