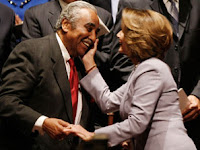 “Culture Of Corruption” was a phrase commonly used by Democratic Party leaders like Howard Dean, Senator Chuck Schumer, and Congresswoman Nancy Pelosi when referring to the Republican controlled Congress during the events leading up to the 2006 midterm elections.

The phrase began to catch on with the Democratic Party’s base after a series of political scandals involving Republican politicians rocked the political landscape in Washington D.C. culminating in the indictment of then House Majority Leader, Tom Delay, by a Texas court for violating Texas campaign finance laws. The phrase began to be repeated over and over again on Countdown by MSNBC’s Keith Olbermann and during a statement on Delay’s indictment the current Speaker of the House Nancy Pelosi stated the following:

“The criminal indictment of Majority Leader Tom DeLay is the latest example that Republicans in Congress are plagued by a culture of corruption at the expense of the American people.”

Democratic Party leaders were able to nationalize the election and define the Republican majority as a bunch of crooks that were out of touch with the American people. This eventually led to sweeping victories by democratic candidates across the country as the Democratic Party regained control of Congress for the first time since 1994.

The American People realized that the republican majority lost its way and entrusted democrats to take the country in a new direction. But now we look a head to the 2008 midterm elections and it looks like the same Democratic Party leadership that used the phrase to regain control of Congress is fostering a “Culture Of Corruption” themselves.

Many national news sources reported yesterday that Rep. Charles Rangel (D-NY), the embattled Chairman of the powerful House Ways & Means Committee, has been admonished by the House Ethics committee. According to the committee’s findings, Rangel violated House rules by allowing corporations to pay for a number of trips he and other members of the Congressional Black Caucus took to the Caribbean in 2007 and 2008.

According to the ethics panel’s report, two of Rangel’s staff knew the origins of the money but “submitted false or misleading information” to gain the committee’s approval. The report also indicated that they were unable to determine exactly what Rangel himself knew of the false information given to the committee.

“I don’t want to be critical of the committee. But common sense dictates that members of Congress shouldn’t be held responsible for what could be mistakes by staff unless there’s reason to believe the member knew or should have known,” Rangel said.

Rangel called the Ethics Committee’s ruling “disturbing.” He said he wouldn’t comment further until he spoke with his attorney.

This is the first ruling in a series of House Ethics Committee’s investigations that have plagued Rangel since he was appointed Chairman of the House Ways & Means committee by House Speaker Nancy Pelosi. Apparently Rangel has failed to report over a million dollars worth of assets including a Merrill Lynch account valued between $250,000 and $500,000 dollars. Rengal also is being investigated separately for failing to pay federal taxes on rental properties.

Despite knowledge of these investigations Speaker Nancy Pelosi and the Democratic House leadership seem hell bent on allowing Rangel to keep his Chairmanship.