(Post taken from Tony Phyrillas, a contributor to PennPatriot Blog) 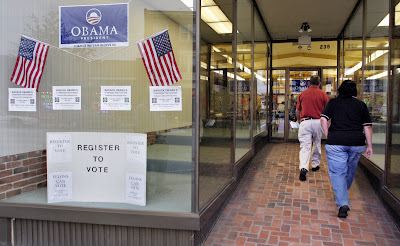 This is wrong in so many ways, I hardly know where to begin.

The Barack Obama campaign opened an office in Pottstown. Nothing unusual about that. The Obama camp is flush with money, some of it from questionable sources, so it can open an office in just about every city, township or borough in the United States.

If you’re walking by the Obama office on High Street in downtown Pottstown, you may notice a sign in the window that encourages people to register to vote (presumably as Democrats). But right next to the bold letters “REGISTER TO VOTE,” there’s also this: “FELONS CAN VOTE”Who in their right mind would be encouraging convicted criminals to register to vote? The Obama campaign for one. Is Obama that worried about the outcome of the Nov. 4 election that he’s courting felons?

And why is this particular sign on display in downtown Pottstown? Is the borough known for its large “felon” population? Would the Obama campaign put up a similar sign in a more affluent community?

Pottstown residents should take offense at the implication that “felons” are walking down the street on any given day.

Some people may be under the impression that convicted felons are not allowed to vote. That’s not the case in Pennsylvania.

From the Pennsylvania Department of State Web site:

The Commonwealth Court of Pennsylvania ruled on December 26, 2000, that the Pennsylvania law prohibiting convicted felons from registering to vote for five years after their release from prison is unconstitutional. Consequently, if completing an older version of the Voter Registration Mail Application (VRMA) form, a convicted felon who has been released from prison may make application to register to vote by striking through the felony conviction line at Section 9(2) on the VRMA and signing his or her name.

[Please note that convicted felons who are incarcerated on the date of a primary or election are not eligible to vote, irrespective of whether they are registered. However, pretrial detainees and misdemeanants are eligible to apply to register to vote and/or to vote by absentee ballot if they otherwise qualify to vote under law.]

So the law is clear. If you’ve committed a crime and served your sentence, you are eligible to vote. If you’re still doing time, you can’t vote. (But that hasn’t stopped the Democratic Party from sending volunteers into prisons to register voters. This happened in 2004 right before the Bush-Kerry election.)

There’s a certain “win-at-any-cost” mentality among Democrats that is unseemly. Barack Obama may become our next president after Nov. 4, but does he really want the “felon” vote to put him over the top?

I’ve said before in many posts about Barack Obama that you have look at the company he keeps. Anti-American loons like Rev. Jeremiah Wright. Former members of the Weather Underground terrorist group. Indicted politicians and political contributors from the Chicago political machine. And now convicted felons.

Barack Obama keeps telling us that he’s a new style of politician. He can bring the nation together. The rhetoric doesn’t match the reality.

Barack Obama voted 97 percent of the time with Democratic leadership in the Senate in 2007, according to Congressional Quarterly. You can’t get more partisan than that. 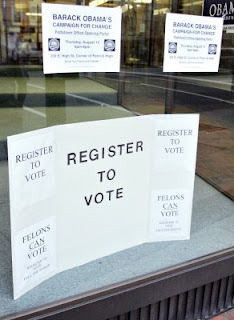 A week after opening its downtown Pottstown office and placing a large sign in the window encouraging felons to register to vote, the Obama campaign abruptly removed the sign from its storefront window.

As I pointed out in a previous post, the Obama campaign was courting felons in communities like Pottstown and Norristown, which have high minority populations.

There was no mention of felons in the Obama headquarters in a more affluent community like West Chester.

A spokesman from Obama’s Philadelphia campaign office told The Mercury that the decision to remove the sign was made at the local level.

“They just realized maybe it was sending the wrong message and took it down themselves,” Sean Smith told the newspaper.

Read more about the felon signs controversy in today’s edition of The Mercury.