Put Down Your Guns, or this Koran Gets It

I had an idea about burning the Koran.

It is, of course a highly disrespectful act. It is discourteous. It is even a hostile act. But hey, so are murder and war.

But as the Bible tells us (in Ecc 3:1), “All things have their season, and in their times all things pass under heaven.”

It really seems to have a big effect on some Muslims, when one guy on the far side of the world burns a Koran. How many people have they killed? 20?

What if we turn the tables? Instead of them killing people in reaction to a Koran being burned, what if we were to tell them that we will burn Korans until the killing stops? 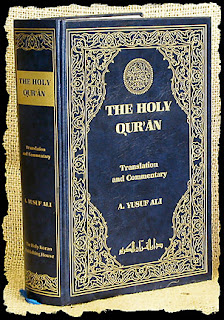 What if we were to say, the American people will burn one Koran every day until the killing stops in Afghanistan, Iraq, and Libya?

When they kill people, somehow it gets blamed on a guy in Florida who wasn’t anywhere near the killing. It’s a childish sort of “see what you made me do?” defense. Well, if those are the rules of the game, let’s play by them. Sauce for the goose is sauce for the gander.

We could put a weregild on every American killed by a Muslim. We’ll burn three Korans for every enlisted man they kill, five for every officer, and ten for every civilian. And until they stop killing each other, we’ll burn one every day.

Or is it possible that they’ll use any excuse to kill, and any little thing at all will do as provocation, so that they can shift the blame for their wanton killing onto someone else?

To ask the question is to answer it.

(Cross-posted from Thoughts of a Regular Guy.)