As part of my campaign for State Representative in Illinois, I spoke yesterday at a candidate forum sponsored by the Lake County (IL) Right to Life organization. Over 20 candidates spoke there, including six Republican Candidates for governor.

I noticed something that bothered me: Almost every candidate began by talking about his religious upbringing.

This one was the son of a pastor, that one was one of nine children of a Catholic family, one was a conservative Jew, another an Indian Hindu, but almost every one, if not in fact every one, started discussing the life issue from a religious perspective.

And, what makes me crazy, some of them use that religious foundation as an excuse to avoid facing the abortion issue in law. 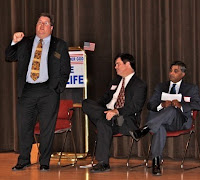 This is why, as you can see in the video linked below, I eschewed all discussion of religion to assert the importance of protecting human life in terms that should be equally accessible to anyone.

And they say I’m a religious fanatic.