Meet Cleveland Occupier Brandon Baxter.  A few weeks ago he was one of the few remaining protesters manning the shabby Occupation tent on Cleveland’s Public Square. Today he was arrested for plotting to blow up a major bridge in the Cuyahoga Valley National Recreation Area.

Anthony Hayne is another member of Occupy Cleveland. He was highlighted in an October, 2011 story in the Lakewood Patch about his work trying to spread Occupy Cleveland to the suburb of Lakewood.

This is my home turf.  I grew up not far from the bridge they plotted to blow up and my husband works in downtown Cleveland, very close to the other potential targets this group discussed. I attended the original Occupy Cleveland event and reported it here at RedState and also reported the rape of a teen girl in the camp and the group’s field trip to Cleveland City Council, where their received a hero’s welcome. This is personal for me.

Make no mistake. These individuals were associated with Occupy Cleveland and the self-proclaimed anarchists have the EXACT SAME COMPLAINTS as the Occupy movement.  The FBI complaint, which contains conversations between the suspects and an undercover agent are filled with the language of the Occupy movement and in fact, the suspects were originally identified at an Occupy event in Cleveland.   Here are some details taken from the FBI complaint:

“Based on an initial report of potential criminal activity and threats involving anarchists who would be attending an event by a protest group, the Cleveland FBI directed the CHS to attend that event. On October 21, 2011, approximately 6:30 pm, and while the CHS was attending the event, the CHS identified four suspicious males with walkie-talkie radios around their necks. Three of the four men had masks or something covering their faces; one man did not. The men were wearing black or dark colored shirts, had black backpacks, carried the anarchist flags and acted differently than the other people in attendance. The four males were subsequently joined by three more males wearing scarves or towels around their heads. The whole group appeared to be together and was constantly moving throughout the crowd expressing displeasure at the crowd’s unwillingness to act violently. During a briefing between the protestors and organizers, the organizers explained who would be arrested emphasizing that they wanted to conduct peaceful civil disobedience. One of the original four men turned away and said “f-k that” before the group of men walked away.”

Twenty protesters were arrested that night for violating the city’s ban on overnight camping. Though I have been unable to track down the names of those arrested (The Cleveland Plain Dealer did not think it was newsworthy to report the names), there was a photo of the criminals when they appeared in court:

Are the terror suspects among those arrested? I don’t know, but a couple of them bear a resemblance to those charged in the terror plot. 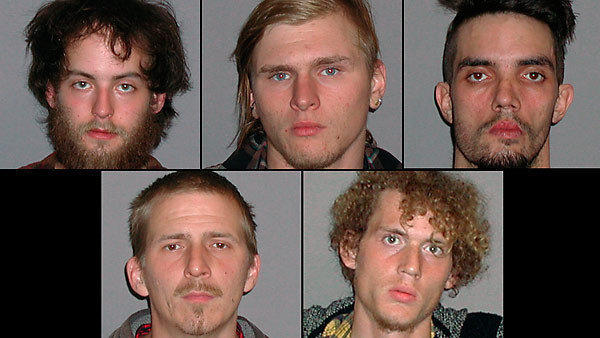 After the informant made contact with one of the anarchists he met at the 10/21 Occupy Cleveland event, he set up meetings with Doug Wright, and eventually, the other suspects.  Here is some of the information gleaned from the investigation:

“Wright explained to the CHS that he and a group of anarchists Wright recruited had been discussing plans involving violence and destruction to physical property in a variety of ways in order to send a message to corporations and the United States government.“

“The group of five to six men…wanted to knock the bank signs off the tops of the larger buildings in downtown Cleveland….they needed to make sure everyone knows that the actions was against corporate America and the financial system, and not just some random acts.”

“Wright and Baxter decided that doing some kind of attack during the opening of the new Casino in Cleveland would make a good statement. Baxter went on to talk about the G-8 in chicago and the Republican convention in Tampa.”

BAXTER:  “Taking out the bridge in the business district would cost the…um...would cost the corporate bigwigs a lot of money not just because of structural damage to the bridge but because it’s going to stop a lot of people going to work.”

The conversation then switches gears on March 31st when Baxter, obviously distracted by his work as an Occupier/Community Organizer, complains about the City of Cleveland denying his request for a permit. He makes clear that there is overlap between the anarchists and the Occupiers:

Baxter then discussed the fact that he believes the city of Cleveland is going to give him a difficult time about acquiring a permit for an upcoming festival. He wants to march on city hall. Baxter said, “I’m going to straight up tell the city we are not playing by your f–king rules.” He continued by saying he knew the city was trying to shut them down and that, “if you shut it down we will blow it wide open.” Baxter was also upset because he is presenting the festival as a family friendly event and the city will not support them. When asked about comments Baxter previously had made about how the last few days of the festival were going to get crazy, Baxter replied, “Yea, but they don’t know that.”

At an April 7th meeting, the group discussed blowing up a Klan or Nazi headquarters. The informant said he thought there was one in Wooster or Lodi, which is in “Southern Ohio,” 45 minutes away (I will refrain from making comments about the state of public education in Ohio!). The group decided this wouldn’t help their cause. Baxter “advised that it would not stop money flowing to the One Percent.”

Up twinkles if you agree this is a good idea?

The next meeting was on April 10th and they discussed other targets. They decided against the Cleveland Justice Center because they didn’t want to harm “inmates” and anyways, there would be too much security. The next idea was to blow up a cargo ship in Lake Erie so they could “f–k up” some merchandise.

The group thought the Occupy May Day protest would provide not only a good distraction (police would be so busy with that nonsense they wouldn’t notice a few random terrorists), but also an alibi:

“He suggested doing it during the “fest” or May 1st, because police will be downtown and not around the bridge. In order to create an alibi, Wright suggested they could be downtown and be seen, then get to the river to blow up something, and then go back downtown.”

Note that they understood that they would be “seen,” implying that those at the protest would recognize them and later report they had been in attendance at the rally.

Much more damning is Baxter’s confidence that he could lead the crowd away from the site of the explosion:

“Baxter stated that he is rallying in May Day so he could act as a decoy or diversion and move the crowd away from the river so that the police are removed away as well. He agreed that he could move them to another place such as city hall after Wright’s suggestion.”

Baxter was planning to use his position as a leader in Occupy Cleveland to divert attention away from the planned terror attack.

“Baxter stated that they may not have to drive downtown that day because there is talk about setting up a tent city.”

In fact, Baxter and his fellow Occupiers were so enmeshed in the culture of Occupy Cleveland that they had to postpone the original pick-up time for the explosives in order to attend an Occupy “festival” in the city:

“Wright further told the CHS that the time of the delivery [of the C4] needed to be changed to either before the start of the festival on Saturday, or sometime on Sunday, April 29, 2012. Wright said that he, Baxter, and C.S. wanted to attend an event associated with the festival and could not make the meeting previously agreed upon.”

Ultimately, the group decided to blow  up the bridge in the Cuyahoga Valley National Recreational Area.

Their plan was to use the May Day Occupy protest as their alibi:

“Wright said that Baxter, (C.S.) [Connor Stevens] and he would be downtown at the festival and should be seen there to help establish an alibi.”

On April 29th,  they met at a hotel and purchased what they though was a duffel bag containing enough plastic explosives to take down a massive bridge:

“Approximately twenty minutes after Wright called the UCE, the UCE arrived at the location and the meeting was recorded. In sum and substance the UCE arrived and asked Wright, Baxter and Hayne for the money. Wright gave the UCE $450 and counted it quickly in front of him. The UCE gave Wright, Baxter and Hayne a duffel bag containing the vests, smoke grenades and gas masks. The UCE then opened the two black boxes containing two inert IEDs. “

Occupy Cleveland has the following statement on their Facebook page:

Of course, coming from a group that cannot arrive at a definition of “violence,” a declaration that they are dedicated to “non-violence” gets lost in the noise.  For example:

“Some of us are morally opposed to handing someone over to the cops and consider it a violent act…I can tell you for a fact that at least one other prominent Occupier is strongly opposed to calling police, for the same reasons stated here. Even when someone has committed violence, this person says, putting them through the criminal justice system only imposes more violence.”

While I’m not at all suggesting that everyone associated with the Occupy movement is a terrorist or that many (or even most) are not dedicated to non-violence,  it’s now clear after today’s event that it can and does harbor anarchists in its midst. Spend some time on their Facebook pages (and check out the profiles of the commenters) or read through their forums and you’ll find that you can’t swing a cat (or a dog if you’re a Democrat) without hitting an anarchist. The Occupy movement’s penchant for accepting everyone’s viewpoints as equally valid and its unwillingness to say anything is wrong (except the 1% and the Republicans), creates a virile breeding ground for the kind of people who plot to blow up the bridges my husband drives over on his way to work in the morning.

We have to ask, how long before before one of these plots is successful? Though our law enforcement officials did an excellent job of conducting this investigation,  it seems like it’s only a matter of time until one of them succeeds. When a group like Occupy Cleveland considers turning violent criminals over to police an act of violence itself, they must be considered complicit in whatever results from their inaction.