#OccupyCleveland Day 7: Send rain ponchos and panties (for both of us)

A week ago I posted a diary about my undercover trip to #OccupyCleveland. I thought I’d drop by a week later to see how things were going. This time I had my 20-year-old son, a Hillsdale College student, in tow and our plan was to blend into the crowd and observe the action. However…

No crowd. No action. Nothing to observe.

You see, it rained in Cleveland on Day 7 and the temps dipped to a dangerously frigid 65 degrees Fahrenheit. While we saw several stray protesters making a halfhearted effort to march at the state office building for a few minutes, the dozen or so remaining #OccupyCleveland kids were hunkered down in their tent suite (the word ‘city’ would be hyperbole) doing something that was probably really important for the cause. Not a creature was stirring outside the tents, though a few of the “occupiers” peered out from under their tarps while I was snapping pictures.

My son said, “It just looks like a bunch of homeless people camping on the sidewalks,” noting that, “They can’t even pitch a tent correctly.”

Thinking that perhaps it was nap time for the kiddos, we decided to grab a cup of Capitalist Coffee and check back in an hour. At 4:00 pm a light drizzle was falling and workers were beginning to pour out of Tower City and the adjacent office buildings. It was the perfect time to chant and wave signs about corporate greed!

Sigh. The kids must have slept through the the alarms on their iPhones. Being a revolutionary is so exhausting. And damp. And not nearly as much fun as they thought.

Due to a Cleveland city ordinance designed to control homeless people, the protesters are only permitted to sleep on the sidewalk. Unlike the Wall Street protesters, the Cleveland group is squatting with a permit from the city (which expires on 10/17).  Today they lost their bid for permission to set up camp inside the historic Soldiers’ and Sailors’ monument. 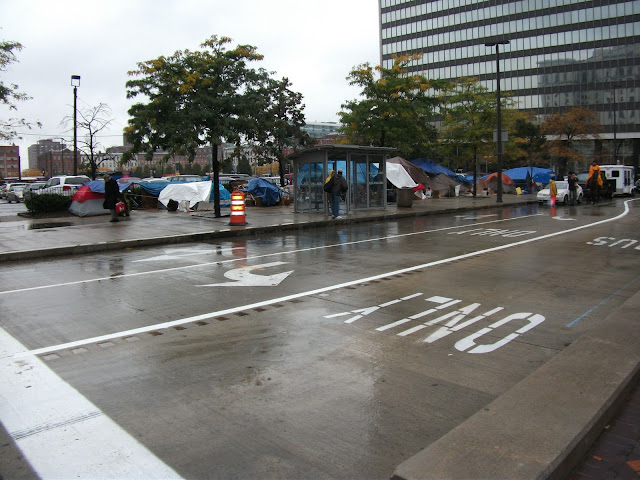 Although the protesters were mostly MIA, law enforcement officers were highly visible. In fact, Cleveland police officers may have outnumbered the protesters. This is not an exaggeration. They were in cars, on foot, on horseback and accompanied by dogs. In the second picture below you can count four squad cars. This is in addition to the two officers on horseback and others driving around the area and on foot patrols.

By all accounts, these protesters have been peaceful and in fact, have been in solidarity with the CPD.  So the heavy police presence may have been related to the many school children who catch the bus at Public Square (or concerns about a combination of protesters and school children). 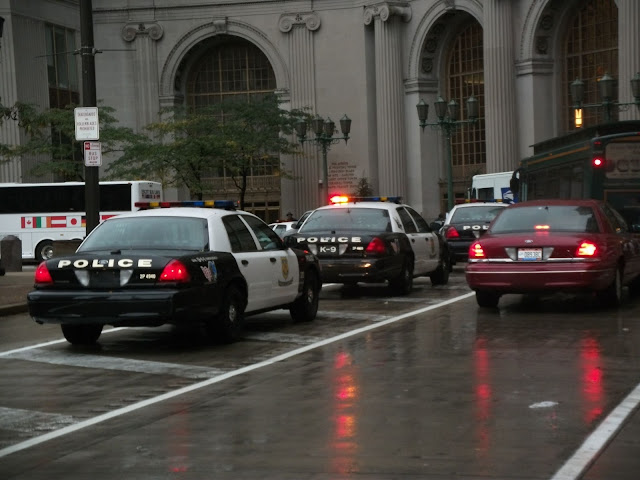 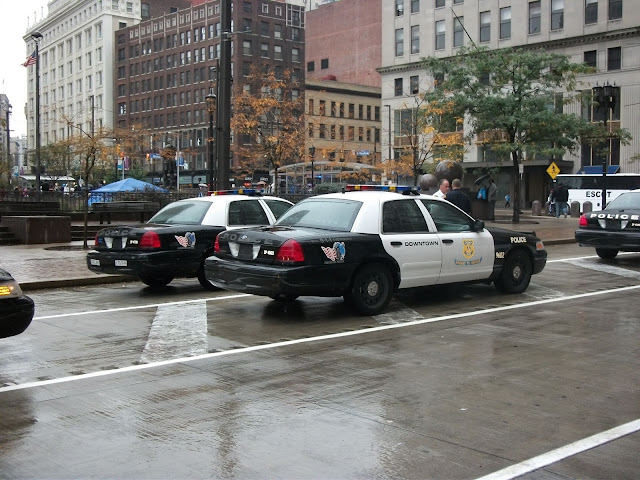 There are several large electrical boxes scattered around Cleveland’s Public Square. The city has them wrapped in police tape so the protesters cannot access them.  However, the one directly across the street from the encampment has an extension cord running through the trees, across the street and into one of the tents. The city must be aware of this and is permitting it so the kids can charge their iPhones and Macbook Pros. 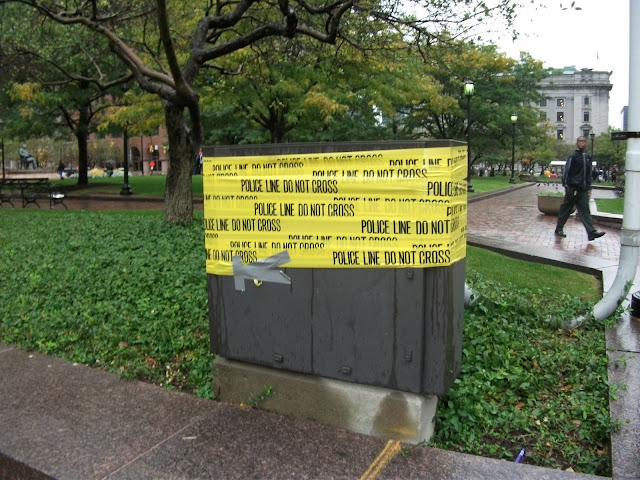 Also, across from the historic 116-year-old Soldiers’ and Sailors’ monument, a gorgeous row of porta-potties has sprouted.  Today was sucking-out day and the smell was vile.  I’m sure the greedy 1% checking into the nearby Ritz Carlton were thrilled. On a side note…they’ve filled four porta-potties in seven days???? Reason #8389 I’m not a vegan. Just sayin’. 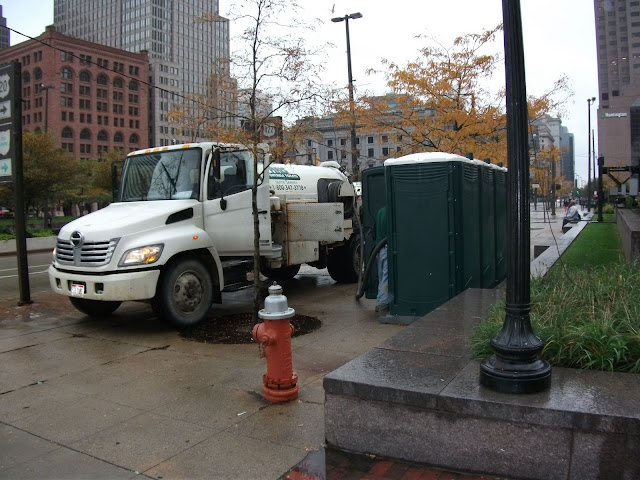 So in just a week, we’ve gone from around 200 protesters (or 100 protesters and 100 media members and gawkers) to a handful of campers hunkered down in tents at the first sign of inclement weather.  Campers who have just begun to realize they didn’t prepare well.  From their #OccupyCleveland Facebook page:

#OccupyCleveland Tarps and tents and umbrellas – stat. Please do not just stay on the sidelines, we need everyone to help out! Weather forecast is rain, rain and more rain. We need to keep our occupiers healthy and dry! And fed! Some home cooked food would be so amazing. Oh, and feminine hygiene products, socks and undies.
First, TMI, right?
And undies? Do they really expect people will provide them with clean undies “until they see some change in America“? (Hanes stock closed at $27.50 yesterday if anyone is looking for a tip. If this occupation catches on, we can all retire early.)
Someone named Christine is worried sick about them:

Christine I feel so helpless. I am in Akron and cant make it up until the weekend…I desperately want to do something. Somebody local please see what you can do today to help and give them some comfort. So worried about you all.
No worries though. Rep. Betty Sutton (D-Copley), whose district surrounds Cleveland and who’s been targeted for redistricting,  joined  #OccupyWallStreet on Wednesday to fortify the troops and join the group’s Labor March. I’m sure that was encouraging.
And speaking of encouragement, I’m wondering what happened to all the union BFF’s that were at #OccupyCleveland last week. Fair weather friends, I guess. There was an exchange on the #OccupyCleveland’s Justin.tv site that about sums up the effort:

It’s tough being the 99% when there are only, like, twelve of you and strangers you’re depending on for handouts aren’t bringing enough ponchos, panties, and pancetta.

UPDATE: On Wednesday, the Board of the Soldiers’ and Sailors’ Monument denied the protesters’ request to sleep inside the monument. The monument “to commemorate the valor and patriotism of the Union Soldiers and Sailors of Cuyahoga County, State of Ohio, in the War of the Rebellion, from 1861 to 1865” (irony alert) received a $1.5 million restoration in in 2010. The squatters wanted to park their unwashed bodies and old underwear here:

The monument’s board, made up of patriotic veterans, wisely turned them down.

Watch: Hundreds of Police Storm a Church in Shocking Video After Parishioners Try to Have Service
Bonchie