Liberals and the "The (Mid-Term) Sound of Silence"

By Patricia_C | Oct 16, 2010 11:03 PM ET
Share Tweet
Share
Tweet
A year ago, members of Congress and their staffs were apprised of the results of a tax payer funded study conducted by Congressional Management Foundation entitled, Online Town Hall Meetings: Exploring Democracy in the 21st Century. And the glorious lesson learned by this study regarding Town Hall Meetings and Democracy in the 21st Century?

The best way to increase your approval ratings and remain in office during a bad election cycle is to avoid the inconvenient questions of your constituents might want to ask regarding your agenda to screw up their lives.

Yep… Not only are the liberals forcing us to fund job/freedom killing policies we do not want, they are making us pay for studies on how to avoid answering our questions of “why” in order to stay in office to continue screwing us…. Yay!

With images of overheated, finger-waving crowds still seared into their minds from the discontent of last August, many Democrats heeded the advice of party leaders and tried to avoid unscripted question-and-answer sessions. The recommendations were clear: hold events in controlled settings — a bank or credit union, for example — or tour local businesses or participate in community service projects. 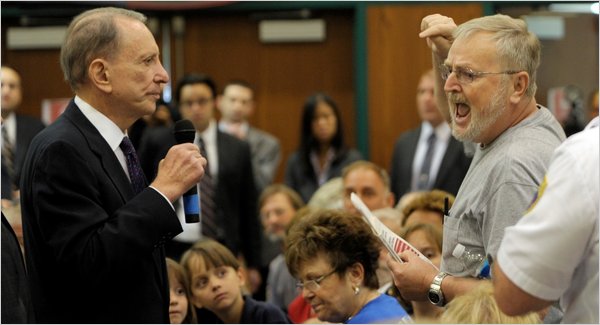 In August, democrat leaders advised their members to avoid discussion of ObamaCare and Human Events reported that a survey conducted by the National Republican Congressional Committee revealed that out of 75 Democratic House members who are targeted for defeat by the GOP, 65 of them had not scheduled a town hall meeting with their constituents. A website out of Arizona reports how democtrat incumbent Harry Mitchell is avoiding town halls and won’t post a public schedule on his website in order to avoid his constituents. Although his website has a tab where you can apply to Host an Event with Harry, claiming that “Harry wants to meet your friends, neighbors, family and colleagues and talk about what issues are important to them” there are no signs that anyone has applied or that Harry has accepted any invitations to meet those friends, neighbors, family and colleagues” to actually talk about said “important” issues.

Hell, Nancy Pelosi won’t even make time to debate her challenger John Dennis because her job is to get her democratic candidates on TV and to “elect a democratic congress”… not to debate annoying things like “issues” with her republican challenger… or to speak before her constituents to address their concerns or to represent their will.

Well, I guess that study regarding Town Hall Meetings and Democracy in the 21st Century must have worked because haven’t heard squat during this pre-midterm election cycle… which brings me to this video clip… which is probably as close to the truth as we are ever going to get regarding the lack of face-time with our hard working liberal representatives in congress…