What do Tea Party Americans and the Detroit Red Wings have in Common?

Although I live in Florida now, I lived in Royal Oak, Michigan for 20 years… and while I have been caught cheering for the Tampa Bay Lightning now and then I will always have a special place in my heart for the Detroit Red Wings. You see… outside of providing me with some (predominantly depressing) seasonal entertainment for two decades, they taught me something very unexpected… something valuable… a lesson with such profound impact it has left me forever changed.

I have been paying attention to something lately, something I didn’t quite see as important before. But “it” is starting to grow some legs and, after crawling around on the floor for a bit it is standing up, gaining its balance and threatening to get strong enough to start running…

Therefore, my beloved brothers and sisters, my precious fellow Americans, I come before you today to swing a big stick and to knock “it” flat on its…

When I first moved to the Detroit area I was quickly inducted into the ranks of “Rabid Red Wings Fans”. Only, back then, they were known as The Dead Wings, mostly because they sucked. They were disorganized, apathetic and filled with a bunch of primadonnas whose collective desires to be The Star in each game prevented them from seeing each other on the ice. So… they lost…. for over 40 years…

The organization who brought the likes of Gordy Howe, Sid Able and Ted Lindsay to the world had become an embarrassment to the citizens of Hockey Town and the laughing stock of the entire NHL. Oh, they would do good now and then… even make it to the playoffs a few times… only to choke… again…. and again… and then God said…

“Let there be Scotty Bowman… “

“… and God saw that Scotty Bowman was good.”

Scotty Bowman holds the record for most wins in league history, with 1,244 wins in the regular season and 223 in the playoffs and an unrivaled 9 Stanley Cup victories AND  is the only head coach in the history of the NHL, Major League Baseball, the National Football League, or the National Basketball Association who has won championships with three different teams…. But even so, back when he was named coach of the Detroit Red Wings (’93-’94 season)… the “team” wasn’t too thrilled. You see, Scotty didn’t care who “they” thought “they” were.

Now, “Googling” this might not turn up much. I didn’t even bother checking myself. I was there. I don’t need Google to verify or prove what I experienced and saw for myself… Scotty rocked the Red Wing boat. He threw away the “business as usual” strategies that had lead them to over 40 years of loss, traded big name players, stripped the remaining primadonnas of their respective crowns… He made them focus on DEFENSE. Keep the puck out of the net and take your shots when they come. DEFENSE! They resisted him… they faught him… they hated him… and they kept getting beaten… they kept losing… Then one day, after yet another humiliating loss… the (then) young Team Captian, Steve Yzerman, went into the locker room and called his charges to a meeting. Although I am not convinced he himself yet “believed”, he offered a suggestion… Let’s give it a try. Clearly, “their” way was not working and he suggested that they give HIS ideas a try and THEN decide who was right or wrong… That was around 1996… In the 1996-1997 season, The Detroit Red Wings won their first Stanley Cup in 42 years.

I will never forget that night. I wasn’t fortunate enough to be IN “The Joe” that night… but I was down town… at a bar called The Post, located at the intersection of Cass and Congress… walking distance from the Arena… “Our” slogan back then…? “I Want Stanley”…. and we GOT Stanley that night. The town came unglued, and in spite of world-wide speculation that the night would end in massive riots, there were fewer incidents of crime that night than on a typical Saturday night. We were too damn happy. Even people who hadn’t paid attention to hockey their entire lives were joining in the celebration. There was a scream of joy that spilled out into the streets and went up that night as truly empowered… energized… deafening… Six days later, on June 13, 1997, the celebration came to a sudden and utterly horrific hault when a drunken limo driver plowed into a tree on Woodward Avenue with passengers, Vladimir Konstantinov, fellow defenseman Slava Fetisov and Red Wings’ masseur Sergei Mnatsakanov, inside. Slava suffered only minor (physical) injuries. Sergei was hurt badly… and Konstantinov…? The career of the Stanley Cup Champion player who had been named the Most Valuable Defenseman in the entire NHL, was gone in an instant.

After the devastation of the accident, fans were melancholy… depressed. A moment of joy (after 42 years of waiting) had been stripped away so suddenly we never had a chance to enjoy it… 6 days… It was never the same after the accident. So, as we entered the next season there was a noteable absence of enthusiasm. I mean, come on. Under normal circumstances, winning back-to-back Stanly Cups is nearly impossible. Regular season starts in October and if you make the playoffs it can stretch out until freaking JUNE!… To go back into the race 4 months later… having suffered such a devastating blow like that…? Few had any faith… or interest… and it was making me SO mad.

So, the season went on and, against the lethargic faith of their fans, Stevie Y and his team were winning. As each game and each week and month passed, The Red Wings were unstoppable… and as the playoffs neared… the fans began to awaken… some began to say, hey… after such a physically greuling season and the emotionally crippling loss and the incredible odds against them to do it again… How can this be? Can they really make the playoffs…. again?

Those questions upset me and after a while, they even began to make me mad. To me it was obvious. Stevie and the rest of the team even TOLD their fans “why” and “how”… but they just weren’t listening… Too worried by 42 years of “Dead Wing” history and still mourning the loss of Vladdy to pay attention I guess.

While watching the final round of the 1997-1998 playoffs, I remained happy, faithful… I “saw” it… And by “saw it”, I mean I had a dream. It was the strangest, most unforgettable dream I had ever had in my life. I dreamed I was in Joe Louis Arena… It was dark… silent… and I was floating just a few inches over the ice. As I drifted, I could see the cuts of skate blades gouged into the surface… I could feel the cold against my face… and then I felt that tickle in my stomach as I began lifting upward… higher and higher… into the rafters… and as the lights began to come up I began to see the fans… dressed (oddly) in their red “away sweaters” (not the white “HOME sweaters” I expected to see)… and (although there was still no sound) they were cheering. It was all in slow motion… and my mental vision shifted to a room off the ice where I saw white gloved hands giving the Stanley Cup one last polish… And I saw th scoreboard… 3-1… And then I saw the Cup in Stevie’s hands… being hoisted over his head… and then I saw the wheels of a chair rolling slowly… followed by many skates… From that moment, I knew… 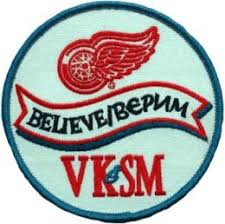 The answer of “how” was right there all along. Stevie Y, the whole team… they kept saying it over and over again. “We are playing for Vladdy”, “We are playing for VLADDY.” And, after my strange dream, for the first time I understood the real meaning of the team slogan for that year… “Believe”… much to the “syni” and “criti”-cisms of my fellow “fans”. I DID “Believe”…. In fact, I believed SO much I put my “money where my mouth was” and placed bets with a lot of pools… I even went into the bigger paying pools by specifying the end score… “3-1″… at which point, bet takers would look at me like I was a “girly-sports idiot” and say… “Three to One is a high scoring game, especially for a playoff game… You do realize this is hockey, don’t you…?” I would smile each time and say “Yes, I know… but I am confident in my bet.”……………. When they’d ask “WHY,” I was so confident I would give them my best “girly-sports idiot,” smile and say… “I aready saw the game.”

It was right there all along… “We are playing for VLADDY!”

So…. “What do Tea Party Americans and the Detroit Red Wings have in common?”

Ironically, that year, guess who the Red Wing faced in the final playoff game…? The Washington Capitals. Who are the ones the Tea Party Team are facing off with in these elections?…. The people in the Capital of Washington.

Now, while the people in the Capital of Washington (like the Washington Capitals) are playing for the political “Stanley Cup”… We The People are playing for something else… And we have a new “coach” on board to teach our “players” in Washington what it takes to win the game… Of course, like the Red Wings when Scotty showed up… our representatives aren’t very fond of the Tea Party. We are seen as a threat… They are worried that their primadonna status will be stripped away… But the “Tea Party Coach” KNOWS how to play the game better than ANYone else. We The People KNOW what it takes to WIN… WE are not playing for a “symbol” of victory. We are not playing for bragging rights or accolades… We are not PLAYING. We are FIGHTING. We are SERIOUS. We… BELIEVE. We are fighting for something we love… something we “Believe” in… our Country… our Freedom. Like the Red Wings in ’97-’98, we are NOT playing for a “trophy”… a 35 pound tower of sterling silver… We are not playing for self-glory or to have our personal names engraved forever into history… We are playing for people we love. We are playing for our children… for our families… for our neighbors. Even if they DON’T believe in what we are fighting for, we are playing for them all… and, in spite of our past losses, in spite of our past doubts and embarrassments.. we will win because no matter how skilled you are at playing games… the REAL test is faith in what you are playing FOR.

So let them play their games.. let them rig their polls and LET them fake their IDs and voter registrations… Let them slash… let them beat us with high sticks and let them grind us into the boards. Yes, we are weary… yes we have been embarrassed and YES we have suffered loss… But it’s playoff time again… and we “Believe”. Do not let “them” distract you. Do not let “them” take you off your game.  Guard “the net”… DEFENSE… protect what you hold dear, play for the ones you love…

While some play for trophies, for personal recognition or self-glory… others focus upon and fight with everything they have for something or someONE they love and truly believe in…. and in the end, when it comes to “winning”… you will NEVER stop motivation of that latter level.