I live in Florida. Charlie Crist is my Governor. He wants to be my senator… But ever since he took office, locating the man who promised to come to work “every day” is like playing an enfuriating game of Where’s Waldo. I tell you, some days lately I just don’t know whether to scream or pull my hair out.

Every time I see Charlie Crist on my local news… or read about him in the local papers, or see his face or hear his voice on some cable news program or in one of his perpetual campaign ads… I can literally feel the little hairs start to bristle on the back of my neck.

Now, if you want to read about the waffling and overall pathetic job performance as Governor, feel free to read my previous posts. I don’t want to rehash it. It makes me nauseous. What I want to do here is give myself something to look forward to by giving focus to what I feel is the pending (and much deserved) demise of Charlie’s lofty political ambitions… which is currently being played out on a more delightfully public stage through his ridiculous and unwittingly clumsy bid for a seat in the US Senate.

In 2006, in his campaign to be elected Governor of the State of Florida, Crist promised Floridians: “I’ll work for you every day.” Well, for a man who used an empty chair to symbolize missed votes in Congress by his Democratic opponent, Jim Davis, Crist himself has been ironically MIA.

Crist was sworn in to office of January 2, 2007… Three days later – he took the day off. Since then he has taken another 123 days off and worked 238 half (or less) days (excluding weekends), which is equal to an additional 164 days off.

Of Crist’s gubernatorial campaign promise to “work every day”, Rubio campaign spokesman Alex Burgos said, “It’s clear that was just another thing he was willing to say to get elected.”

Of Crist’s failure to “work every day”, Meek spokesman Adam Sharon said Crist (much like Obama who spent his time as Senator running for president and his time AS president staging photo-ops, throwing lavish parties and going on vacations) “prefers running for office rather than sitting in one …”

The only official business for Charlie in the past month was a telephone call to Shane Strum, his chief of staff (most likely to order Mr. Strum to clear any items from his gubernatorial schedule and to free up time for his campaign for the Senate). Between photo-ops with President Obama and studio time to film or record campaign ads, Charlie did manage to squeeze in a meeting with heads of executive branch agencies on Sept. 2……….. the first such meeting since July 21.

But “Waldo’s” status as Governor of Florida is nothing new. Even before he began using his time as Governor to campaign for the Senate, Charlie Crist established himself as a consumate (albeit well dressed) slacker. It was over a year ago when the Sun Sentinel (Broward/Palm Beach) reported:

The response from “Waldo” regarding the scrutiny and criticism of his “work” schedule?

“I’m never not governor,” Crist said this week. “I have no days off. I’m working all the time.”

Until now, Charlie’s pathetic work schedule and utter failure as Governor of Florida has been confined (more or less) to the borders of our State. However, that Charlie is tossing his fedora into a National Political Ring, Charlie’s “work schedule” is being noticed (and ridiculed) outside of the Sunshine State and has even served as fodder for the DSCC, who have launched a “scheduling hotline” to assist locals in locating him during his hectic campaign for a senate seat.

Sorry to keep you holding we have not been able to find him … It seems he has been missing for over 62 weekdays from his office. That’s odd, I wish I could go missing from work for nearly 3 months without anyone minding!

Your Menu Options are:

Press 1 to continue to hold for Charlie

Press 2 to schedule a private yacht cruise with Charlie

Press 3 to meet Charlie at a Miami Heat’s game

Press 4 to receive a text message when we have more information on where Governor Crist has been hiding for all this time.

I encourage you to dial the number… and make sure pick a Menu Option and listen further… Then re-dial, and select another. I have… several times. It makes me laugh… a lot… Like many of you, in these sad days, I take serious advantage of every opportunity to savor every scrap of humor I can find.

So…. Much to my sincere pleasure, attention to Charlie’s failure to do his job is beginning to gain some serious traction and, as the campaign for Florida’s Senate Seat heats up, I am eagerly anticipating the loss of even more tread from Charlie’s spinning tires.

“In his final months as governor, Charlie Crist is phoning it in – literally.

As his U.S. Senate campaign shifts into high gear, Crist’s official daily work schedule shows him spending less and less time as governor, and more and more time checking in with his aides from the campaign trail.”

And how is this schedule of spending “less and less time” (in an already anemic job calendar) as Governor affecting Charlie’s chances of also wasting our time as a Senator?

National Review Online’s Jim Geraghty gives us a sneak preview of how Crist’s job performance and Hail Mary Party Switch is playing out among Independent/likely voters.

Now… How about I sum up Charlie’s little Political Career Short-Story for you in pictures…. 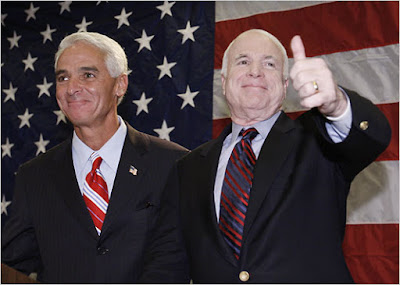 “As long as I’ve got my phone with me, I’m never not governor.”

Well, Charlie, me and a few of my fellow Floridians would like to introduce you to someone who bears a message on our behalf. 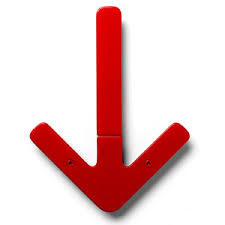 Fact-Check Expert Has to Debunk Himself, Then Gets Schooled on How to Do His Job
Brad Slager