Crist is to Obama as "Same Horse" is to "Different Color"

Yeah, yeah, yeah… I know what you’re thinking. I’m going to make this about “skin color”… and how dare me do such a thing, especially after writing a whole post challenging those who keep throwing down the race card every time they have a grievance or their position is faced with a bit of challenge… But no. This isn’t about “skin color”. But I did choose this Title with purpose… to grab the attention of someone who might not otherwise give interest to something meaningful to me… Consider the test to read my Title and not think of “race” as the same challenge of listening to the William Tell Overture and not thinking once of the Lone Ranger.

Now, I live in Florida. I have lived here since… oh, September-ish of 2003… and, having come from the Detroit area (where I lived for the previous 20 years and observed first-hand the destruction of a liberal agenda) and after watching the current “political party shell game”, which many of our politicians are playing these days, (like many of you) I have become quite adept at recognizing a jack a** donkey when I see one no matter how much padding is in the elephant/moderate/independent suit they are hiding in.

And I will clarify my Title choice. Just bear with me here for a moment…

Barack Obama, a man who was once voted the most liberal senator in Washington and is busily shoving a socialist agenda down our collective throats between his vacations, parties and Tee-Times, claims to be a “moderate” democrat. Former republican, Charlie Crist (who seems to have had his lips surgically attached to Obama’s backside) is marching lock-step in support of the liberal agenda… yet now he claims he’s an Independent.

Against the will of the majority of Americans, Barack gave us ObamaCare anyway. Charlie’s position on ObamaCare changes like The Cone of Death during a Hurricane Update but he apparently seems to agree daily with whomever happens to ask him the question. Like with Obama, Charlie is opposed to achieving energy independence by allowing us to drill for our own oil. Charlie’s “position” always (magically) coincides with opinion polls or the opinion of someone “higher up” on whose coat tails Charlie wants to go for a ride. In November of 2005 (when he was running for governor and Florida residents were predominantly opposed), Charlie opposed having oil rigs 125 miles off shore. However, in June of 2008 when John McCain (who also changed his position on the issue and seemed to be considering Crist as his presidential running mate), Charlie said he was “open minded” about bill HB1219, which would repeal offshore drilling ban and allow drilling TEN miles off shore. Well, now Obama IS president Crist has called for a special session to consider a constitutional ban on oil drilling in state waters.

Back when this photo was taken, Crist opposed Obama’s Slush Stimulous Fund Package: 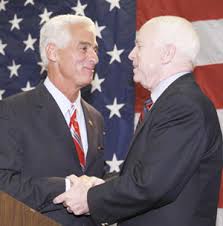 Around the time this photo was taken, Crist curiously changed his mind. 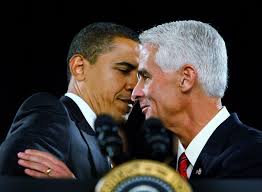 Barack told us he wouldn’t raise taxes, “not one dime” trying to convince us that repealling the tax CUTS instituted by Beorge Bush is not “raising taxes” even though taxes would go up afterward. So… He lied.  Charlie Crist signed into law a “user fee“, which raised the price of cigarettes by $1.00 per pack (the largest tax increase in Florida history), a vote which violated the Taxpayer Protection Pledge Crist made sure he was the first to sign ahead of his challengers when he began his race for a seat in the Florida Senate. He lied.

Obama said his Stimulus package would prevent unemployment from going over 8%  and create 3.5 million jobs. Now the “approved” unemployment number is near 10% and the only jobs created have been through his expansion of government, most of which are temporary and are wasting more money than they are worth. He lied. Charlie campaigned for Governor on the promise to combat out-of-control costs of homeowner’s insurance for Floridians by vowing to drop property taxes “like a rock”… He gave us a pebble.
He lied.

So, who are these men, really? Republican, Rino, Independent or flat out Democrat?  Moderate, Socialist… Christian, Muslim… Gay or not gay…?  Well, (like I said in a previous post (regarding Crist’s ambiguity specifically), both men are, “None of the Above” They are “Opportunists” and that makes them far more dangerous than anything someone might feel the preceding categories might imply. They are like chameleons on steroids and will change color right before your eyes to blend in and have you believe you are safe and that they are as natural a part of that environment as you are.  Since childhood, both men have been honing their skills of deception and they surround themselves with whatever interchangeable props they need to enhance their camouflage. Their promises and alliances are meaningless, temporary. They are the “Same Horse”, willing to publicly trample or sacrifice members of their own political party or constituency and will throw friends, spiritual leaders and members of their own family under a bus if they thought it would lift them higher. They are Narcissists. They thrive upon the beauty of their own image and the envy of those who can’t have it. They are Elitists, surrounding themselves only with those of whose influence they might have some temporary need or those whose daily breaths are dedicated to keeping their egos properly inflated.

Back in April of this year, Gov. Charlie Crist (republican?) shot down Senate Bill 6, which would have linked teacher pay in my state to student test scores and would have eliminated tenure for all new hires. Of course, Christ had already voiced support of the measure… That was, until Civic Concern, a Gainesville-based organization with strong ties to the Democratic Party, sent him their petition, signed by more than 8,000 people, encouraging House leaders to kill the Bill and Crist to veto it if they did not. Well, by more popular demand, the Florida Senate passed SB 6, (21-17) and (for our entertainment, I suppose) Crist defended his decision to obey the directives of the Civic Concern by comparing the bill to the passage of ObamaCare (which he opposed at the time but now supports).

“This thing was rushed through,” Crist said during a news conference announcing his veto April 15, 2010. “Quite frankly, it reminds me of what happened with the health care bill in Washington — where members of my party criticized the Democrats for sort of jamming something down their throat. And then here about a month later after that happens, you know, the very same thing happens here in education. So it’s the wrong process. It had laudable goals. It can be done right. And we have a duty to make sure it is done right.”

Crist described the bill much the way he once described ObamaCare… as “significantly flawed”, “overreaching” and “too vague”. “We must start over,” he said.   I find it rather ironic that those are the same words people are currently using to describe him and Obama.

According to a recent Mason-Dixon Polling & Research survey, only 44 percent of the 625 registered voters who participated gave Crist “excellent” or “good” ratings. Pollster, Brad Coker, said it is the first time the “perennially popular governor has hit below 50 percent”.

The state’s sagging economy and skepticism over the effects of the federal stimulus plan are resulting in the worst ever approval ratings for Gov. Charlie Crist — a hit to his independent bid for Senate…

It’s the lowest job rating posted by a Florida governor in 16 years, and the sliding numbers appear to be mirroring those of Barack Obama… whose policies Crist has (coincidentally) begun to embrace.

Christ is leaving a lot of people a bit confused these days. When he begged (at the last minute) to be added to the agenda to speak before members of the Florida AFL-CIO,  Mike Williams (Florida AFL-CIO President), admitted he thought someone was playing a joke on him. And, as Crist spoke, it was clear that Mr. Williams wasn’t the only one in the room who was confused by Crist’s presence. The audience didn’t seem to know what to think or how to respond and after enough awkward moments Crist felt the need to address the matter directly.

“You may or may not know this, but I am not a Republican or Democrat,” Crist said, which prompted a bit of laughter as if he were telling a joke. “And that means that come September and October, it’s going to be very lonely for me in terms of support from a political party. Very lonely. But that’s OK”… (and then came the punch-line), “because for me it’s about people, it’s not about party,”

No, Charlie. It’s about having the courage to stand for something, not tailoring your position to gain favor, endorsements or the votes of whomever you are talking to at the moment or to gain membership in the Social/Political Climbers Club of those you think will give you a leg-up on the Power Ladder. As Governor of my State, your decisions affect my life and the lives of my family, my friends and my fellow Floridians. But as a senator, your choices will start to affect my entire Country. It’s like taking the on-ramp from a neighborhood and jumping onto a major free-way. In both places the way you drive has an impact on those around you and the more erratic and unpredictable you are the more danger you pose to your fellow drivers. Stop riding the dotted line. Pick a damn lane and stay in it!. Then again, it doesn’t matter. As with Obama in 2010, your license will be revoked this November.

Oh, and that “Different Color” thing?

Well, how else do you recognize the difference between two horses of the same breed, even from a distance when all you can see is the hack of their heads? The same way you can tell who is who in this photograph.