Where is the Anger for OBAMA's Homeless?

Remember back when George Bush was in the White House… (pause… *** sigh *** “Miss me yet?”)
Back then, the liberal media seemed to have a morbid fascination with digging up stories about the homeless, mostly in an attempt to disprove the legitimacy of a report by the U.S. Department of Housing and Urban Development before Congress that the rate of homelessness was actually going down under George Bush.

In 2003, TIME wrote a piece slamming George Bush for his “freak-show economy in which unemployment has reached 6%” and whinning about how if the democrats were in charge things would be different:

“…there’s little appetite in Washington for the large-scale solutions the Democrats have been advocating for 40 years: creating affordable housing and strengthening programs that attack the causes of poverty by finding people jobs, teaching them skills, giving them transportation to jobs, getting them off drugs, providing medical care–essentially trying to fix entire lives.”

But they quickly tell you that this number is not real… It’s faked, brough about by the Bush administration’s redefinition of the word, “homeless” and their new system in counting…

Well, now democrats ARE in charge… WAY in charge… So, where is TIME’s ardent criticisms of Obama’s “freakier” economic show and their opinions on having unemployment hovering around 10%… and where is their mockery of how the Obama administration’s creative method in counting the “unemployed” is what keeps the number from edging closer to 20%?

Yesterday, the Associated Press reported that current homelessness in rural and suburban America is straining shelters and that families who have never before sought government help are flooding the gates for assistance.

“We see a spiral in food stamps, heating assistance applications,” said Greg Blass, Commissioner of Social Services in Suffolk County on eastern Long Island. “Medicaid is skyrocketing. It is truly reaching a stage of being alarming.”

Greta Guarton, executive director of the Nassau-Suffolk Coalition for the Homeless on Long Island said, “One of the things that we’ve noticed is a lot more unsheltered, mostly men who claim this is the first time they’ve been homeless, who indicate that it’s due to a loss of wages or loss of job, because of the economy.”

Again… where is the media in holding Barack Obama accountable? Where is the outrage?

And why haven’t they shown you this?

This little reported event took place back in December, strung up one night over a fence near one of the many homeless tent cities popping up across the country. Liberal activists in Colorado were so afraid of it they even tried to cover it with articles of their own clothing and local news channel KRDO, in a failed effort to discover who financed the banner, made an effort to intimidate Spencer Swann of Colorado Canyon Signs for making the sign by naming him as the creator. Swann, in response to the attention the controvercial banner had stirred, said he has received 100 supportive phone calls and no negative ones since the media “outing.”

Even though the lamestream media ignored the story, Ralph Alter of American Thinker weighed in on the event:

A trillions dollars later, it’s a B.O. problem and the party-of-government media has forgotten all about the Obamavilles. While the Obamas jet back and forth from Scandanavia garnering Nobel loot and posing greenly for the Gropenhagen climate conference, many Americans will spend Christmas living in tents or their automobliles. 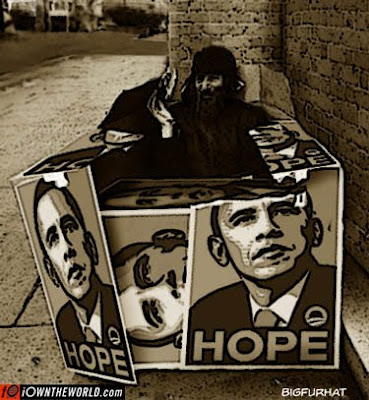 Yeah…  Sarah said it best… “How’s that Hopey Changey Thing workin’ out for ya?”