The Obama Denial Bus Rolls on 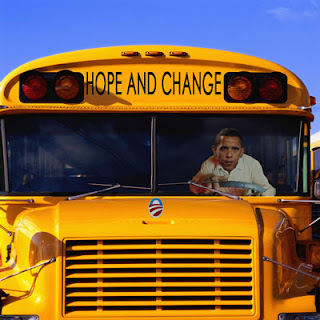 Obama and Vice President Joe Biden launched a sweeping effort to convince skeptical Americans that the stimulus has been beneficial on the one-year anniversary of a plan that was pushed through the U.S. Congress by Democratic majorities.

Too bad that only 6% of Americans are buying that.

Addressing the joint session of Congress around this time last year, Obama promised:

My administration has also begun to go line by line through the federal budget in order to eliminate wasteful and ineffective programs.

Soooo… can he please explain why over $3.5 billion in economic stimulous funds are going to programs that he wants to eliminate or trim in his new budget?

“Our work is far from over but we have rescued this economy from the worst of this crisis,”

Sooo, why is Joe telling us, “Washington right now is broken”, “I’ve never seen it this dysfunctional,” and the country is in “deep trouble” unless it attacks ballooning federal deficits.

I mean, you can’t pay someone to write better comedy than this.

In spite of all evidence to the contrary, Obama repeatedly insists that, because of him, we have been saved. While giving yet another speech, this time at a democratic findraiser in Miami, Florida, Barack said “prominant” economists from both sides of the economic spectrum were warning that America was ripe for another “great depression” and he wanted to address the rising fears that “things might start spinning out of control”, explaining:

… that’s why, working with Nancy Pelosi and the other Members of Congress here, we acted so swiftly and we acted so boldly to pass a Recovery Act that has pulled us back from the brink.

Then again, we know how Barack loves to talk about himself while reminding us, “This isn’t about me.”

And… maybe it’s just me and my twisted sense of humor but… I find it sort of funny that (in the wake of the economic arson they have wrought upon our country) Barack Obama and (more specifically) Joe Biden, would not see the irony of kicking off their One Year Stimulous Anniversary Party on Ash Wednesday with a photo like this:

Clean House in 2025
Townhall
Group has liberated land to be a city for colonized people only; No rent, no kkkops, rona or colonizers allowed
Twitchy
New Poll on MLB Moving All-Star Game Shows Warning Signs for Democrats in More Ways Than One
Redstate
8 Righteous Reasons Why Derek Chauvin Deserves a New Trial –– and That Juror's Shirt Is Only One of Them
PJ Media