This is an article I posted on my own website last month. On a website such as Red State, I am certain to get some negative feedback from it but here it is. 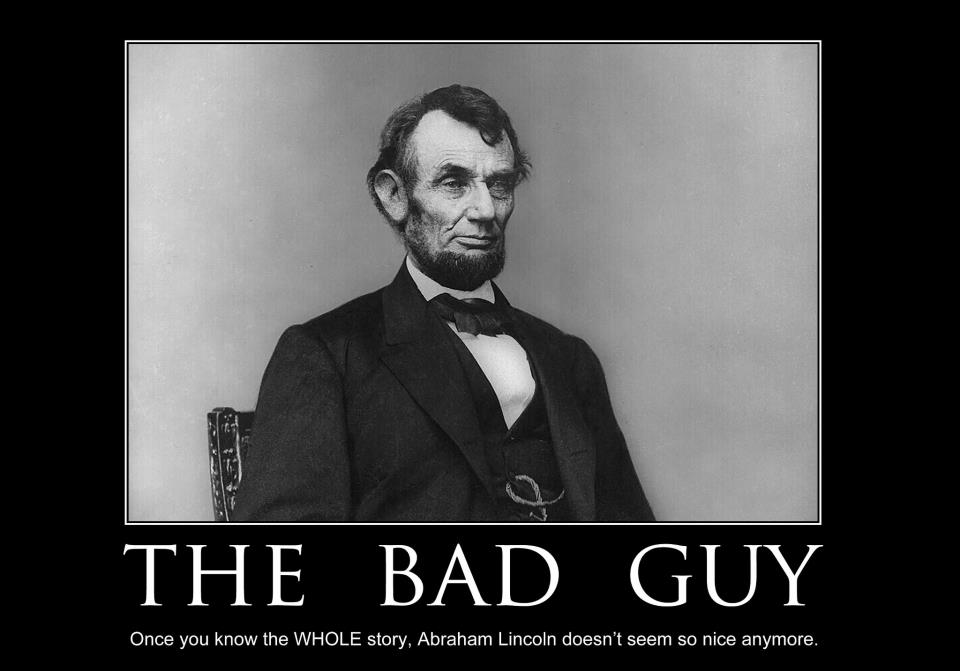 Was Lincoln as good a President as everyone seems to think he was?

Sure he freed the slaves and all that but does that one achievement really make him one of the best Presidents this nation has ever had?

I was watching the Steven Spielberg-directed film Lincoln and, despite the fact that the film was terribly boring, it raised some questions and started some conversations about the man and his repeated violations of the U.S. Constitution.

The ordering of a military blockade of Southern ports. This is an act of war and only Congress can do that.

The ordering of hundreds of newspapers to be shut down because they spoke out against him. He had their owners and editors arrested.

The ordering of the arrest of a Congressman from Ohio for speaking out against him.

The suspension of the writ of habeas corpus. He was told by U.S. Circuit Court Judge Roger Taney that this was a violation of the Constitution and Lincoln had Justice Taney arrested.

The ordering of Union troops into Maryland to confiscate weapons door to door and the ordering of the confiscation of private property for public use.

Some might say that Lincoln’s violations of the Constitution were justified in order to accomplish the greater good.

According to an article written in The New American by Steve Byas:

“These are the sort of arguments used in favor of…the Patriot Act..and for giving the President the power to detain “terrorists” without..[due process]…”

And this brings up another interesting question: was it legal for the Southern States to secede?

While not necessarily a legally binding document, Thomas Jefferson wrote in the Declaration of Independence:

“…That to secure these rights, Governments are instituted among Men, deriving their just powers from the consent of the governed, — That whenever any Form of Government becomes destructive of these ends, it is the Right of the People to alter or to abolish it, and to institute new Government…”

What I think Jefferson was trying to say is that if the government begins to erode the rights of the people, the people have the right, maybe even the obligation, to start up a new one.

If the question is the legality of a state’s decision to secede from the Union, the more important question would be, does a President have the constitutional authority to declare that secession was illegally.

So if you think on all of this and come to the conclusion that, on more than one occasion, President Lincoln overstepped his constitutional authority in his capacity as President, how is he any different than…say…Barack Obama or George W. Bush? The answer is that he isn’t any different. Lincoln was more of an authoritarian than people think. And whether his actions were for the greater good or not, there is a reason we have a Constitution. It is meant to restrain the actions of the federal government, particularly in limiting the powers of a President.

If a President, any President, violates the U.S. Constitution after taking an oath to “preserve, protect, and defend the Constitution of the United States,” then that President, by violating his oath, does not deserve to hold the office. That goes for President Lincoln just as it goes for our current President.