Proof: Democrats at Fault for the Recession

This is perhaps one of the best examples of how the Democrats helped ruin the economy after winning the 2006 elections. Times were good and unemployment was under 5% but all of that new regulation and spending has really, really hurt us.

Under the Democrats, unemployment started to balloon.  It stated to climb, rising past 4.5%, past 5%, past 6%, and past 6.5%, all the way to 8.5% by the time they had been in office for just two years.  By then, President Obama had been inaugurated, and unemployment continued to rise as spending increased.  This chart explains, in depth, the bills Democrats passed, and the effects they had from November 2006-March 2010 (click for a sharper, bigger image): 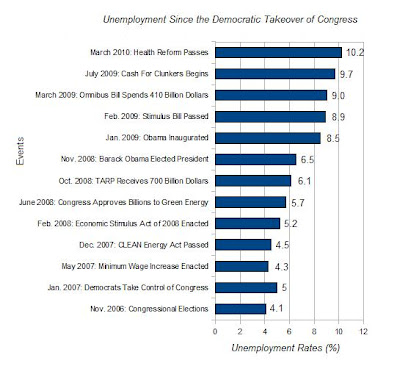