While tax day was raw and gloomy, the energy was high, indeed, at the Richmond Tea Party last night. 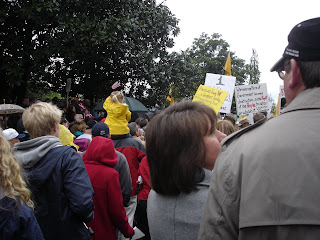 Thousands of people crowded into a soggy Kanawha Plaza in sight of the Richmond Federal Reserve building to vent, learn, cheer, network and, yes dine on fine barbecue. Somewhere in the crowd was the RTD’s Tyler Whitley, who filed this report, which contained a nice message from the Democratic National Committee:

“While we support the right of Americans to petition their government, what’s clear is that the overwhelming majority of folks support President [Barack] Obama’s plan to get the economy back on track and provide 95 percent of working families with tax relief, because they are no longer going to accept ‘more of the same’ as an answer.”

I suggest that the DNC (and the RNC, too) missed the point. The folks I chatted with 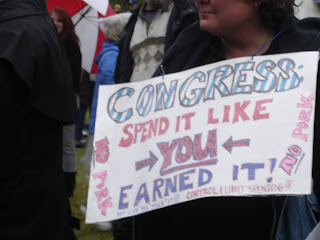 weren’t fans of the current administration. But their animus was directed at the political class as a whole. “Vote everyone out” was a common sentiment.

Now, of course, there were some political-types roving through the crowd…there was former Del. Jack Reid, there was Ken Cuccinelli, over there was Del. Jimmy Massie…that they came shows something. That they weren’t the focus shows even more.

But for a real sense of the crowd’s mood, check out this protester’s message: 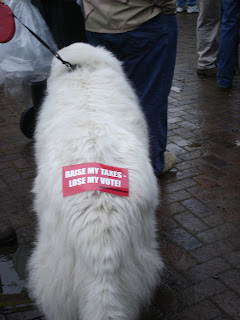 You’ll be seeing a lot of those “raise my taxes, lose my vote” stickers around Central Virginia.

Leslie has video of her remarks at the Reston Tea Party. Michael has some great shots of the Richmond event, RoanokeRnR has some excellent pics, too, and Jerry has the scoop on the Abingdon event…which despite its initial problems with local officials, drew around 400 folks to the Abingdon Farmer’s market, and another 200 at the Farmer’s market in Bristol.SWAC Girl has pics from Staunton, here are more pics from Franklin County…

Let’s just say there was a lot going on, and this only scratches the surface.