There have been a number of articles recently about how the news media carefully crafted this election. The one thing I think is missing is how much more difficult this would’ve been with 6-8 candidates rather than the 17 we had. In any case, I thought I’d present it in geek language which may make it easier for some to understand.

With their plan in place, the media was ready when the Primary season began:

Once things had begun, the press was sent off to do their bidding:

Captain: Take off every ‘ZIG’.

It was clear from nearly the beginning that the media would guide Trump through the dangerous waters to the end. With the assistance of the debate moderators during the debates, the candidates would turn on each other, but too late to turn against the one that would ultimately prevail:

CATS: You have no chance to survive make your time.

Once it was clear that Trump would win the nomination, the media’s plan to destroy Trump was set into motion:

Mechanic: Somebody set up us the bomb.

Trump fell right into their trap, denying what was always known to be true.

CATS: All your base are belong to us.

Now the media basks in their victory, as they move on with a renewed hope.

Oh, and about that hope, you fools… 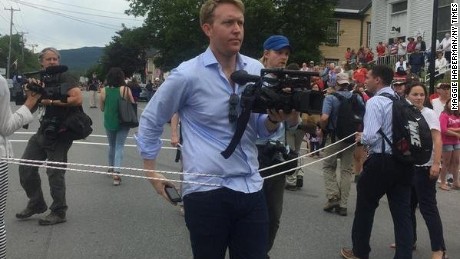 We were all doomed from the beginning, but at least we still get to point and laugh at you.

That’s it for today’s Water Cooler! –OPEN THREAD– Mingle amongst yourselves in the comments.