So here is the July 11th update on the coronavirus.  I figured I’d start with an Idiot’s Guide to Fake Coronavirus Data.  And here it is: 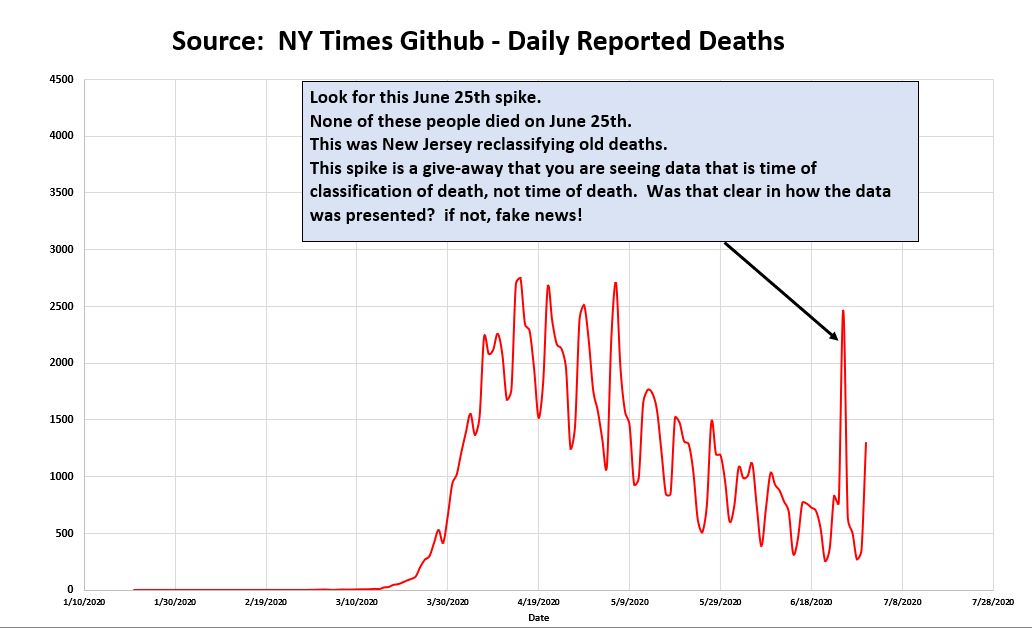 What you need to look for is that June 25th spike.  That spike is New Jersey reclassifying approximately 1900 old deaths as coronavirus fatalities.  They did not die on June 25th, but that is the day New Jersey reclassified them.  And this is how the NY Times presents it (this data is from the NY Times Github).  Note:  Nowhere on the NY Times website or in the github data do they explicitly state they are reporting time of death.  In fact, their charts are labelled “Reported New Deaths”, i.e time of reporting as a covid death.  So technically they are not lying about their data.  But their data is widely copied and erroneously labeled as daily deaths, strongly implying well, date of death.  And isn’t that the essence of fake news – put out ambiguously defined data that is technically correct, let others mis-interpret it, and never issue notifications or corrections?

So here is the latest real update from death certificate tracking.  We had touchdown on the week of June 6th.  Weekly deaths at that point are just a hair above weekly deaths for that same week in 2019.  Not much of an epidemic if the same number of people died that week last year. 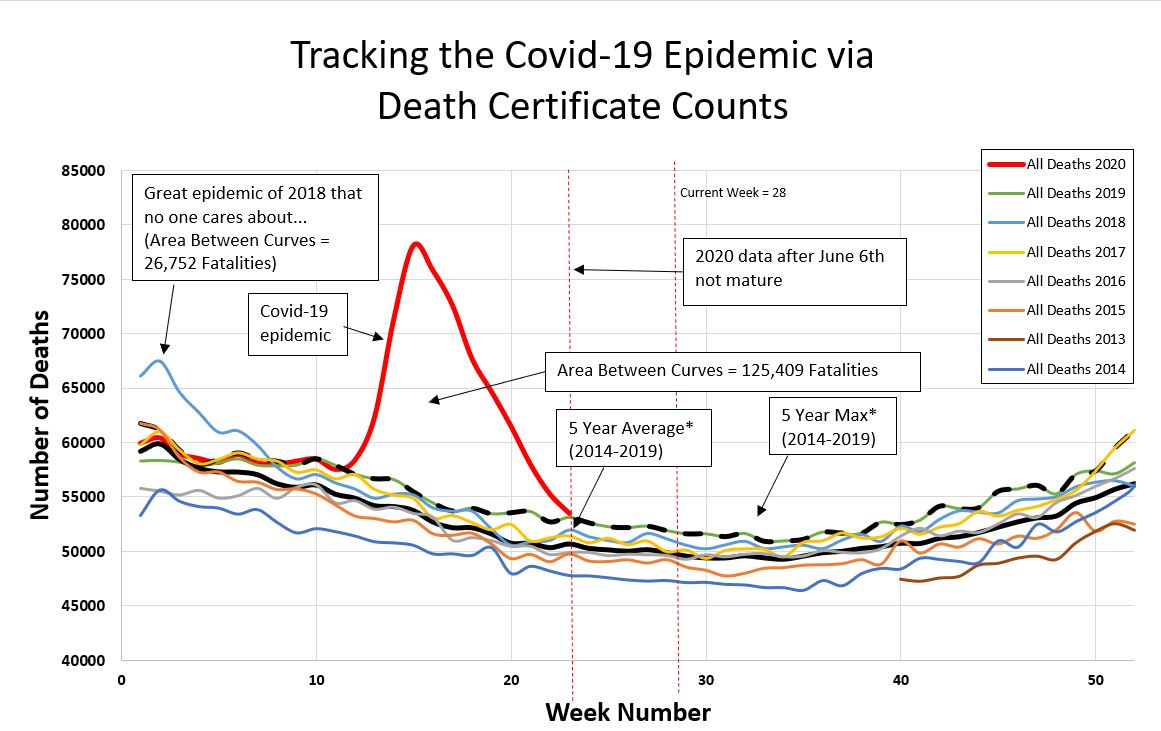 So what of the recent surge in infections?  Well, on June 6th, there was 150,000 infections and no excessive deaths.  Now we have almost 350,000 infections.  Twice zero is still zero.  The NY Times is still reporting old deaths as-if they were current.  The much-hyped surge in US deaths is driven by the June 25th reclassification in New Jersey, and has already disappeared from the NY Times data: The spike is much smaller here because this chart shows weekly totals, not daily totals.  The death certificate data lags by a month, plenty of time for a surge to appear.  But with the NY Times relying on the June 25th adjustment to promote a surge, well lets just say I’m not buying it.

The dumb thing is, I know people are still dying from the virus.  I know someone who passed only two weeks ago.  Unfortunately, has passed two days after going to the hospital, so he went untreated until it was too late. There is an article over at PJ Media questioning how many people did not seek treatment due to the politicization of epidemic.   And that is just part of the damage the misinformation campaign is inflicting – people who should be treated are not going in.

So there you have it.  The virus is real, a lot of people did die.  But, there is also a lot of fake news out there.  And now you know how to spot it :p

PS – One thing I am waiting for on the death certificate data is an inflection point.  There is where the trend in the 2nd chart stops dropping and moves sideways within the 5 year min & max limits.  Wherever that point occurs, it will have interesting implications…